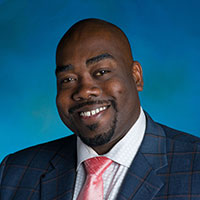 Born and raised in Detroit, Michigan, Shamar Herron learned very quickly that he had options. He could let his unfavorable surroundings dictate his future, or he could forge his own path. Herron chose the latter and began working hard towards his success.

After growing six inches in one summer, Herron knew his passion for basketball could help him achieve his goals. After a long process, he chose to attend The Ohio State University, where he helped lead his basketball team to the NCAA Final Four in 1999. While Herron saw minimal time on the court, he was a consummate and dependable teammate. That skill is one of his best traits in the business world.

As the Executive Director of Michigan Works! Southeast, Herron leads teams that focus on helping people craft and achieve their goals toward a career and connecting talent to business needs. Herron also serves as a liaison between executive thought and day-to-day outputs. His background in economic development, mentoring, and data analysis allows him to play in a variety of arenas.

Herron sits on multiple boards from Youth and Community Development to Prisoner Re-entry and believes no matter how small the contribution feels, it has a major impact. Herron has been married to his wife Melanie for 19 years and has two daughters.


Return to Skilling to Scale: Meeting the Challenge of Talent Demand within IT and Cybersecurity