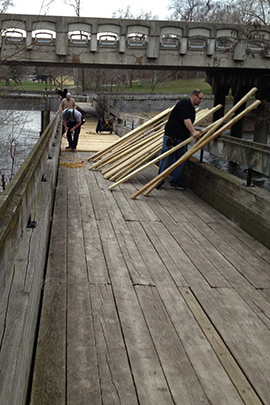 Once again, students in the WCC construction technology program are putting the skills they learn in class to work in the community.

Eight students are volunteering their know-how and muscle to renew and reinforce the Riverside Parktridge, three interconnecting timber bridges in Ypsilanti’s historic district that link the Depot Town and Frog Island areas to the park along the Huron River. The work should be completed by May 6.

According to instructor Cristy Lindemann, who with colleague Loukas Kovanis is overseeing the project, municipal officials originally wanted to remove and replace all of the well-used planks that showed 25 to 30 years of wear.

Lindemann made sure the project was a true reflection of the kind of experience her students could expect in the industry. They traveled to the site, inspected the expansive structure thoroughly, and took measurements. Back in the classroom, they worked up several proposals and presented them to their instructors and classmates as if they were clients. Estimates, without labor, came close to $60,000.

“That’s when I said let’s go out and look at it again and see what our other options are,” said Lindemann. “When we got underneath we realized that the boards were beautiful, as if they had never been touched. That’s when students came up with ideas on how to resurface it.”

The option they chose was resurfacing the boards in place. “We decided to run deck boards in the opposite direction of the existing boards, which will sturdy the system as well as give it another 20 to 30 years with a nice finished surface,” said Lindemann.

Student Chuck Hamilton takes a lot of pride in what has been accomplished and looks forward to returning to the park to enjoy the refurbished walkway. “It’s nice that I can come back and see something I’ve worked on that adds value to the community,” he said. “It’s so much better being on site instead of simulating the work indoors in a workshop.”

“It’s been a lot of work, but it’s been fun, too,” said Jeremy Smith, another student in the class. “It’s great to be part of making something like the Parktridge look good again.”

Lindemann and her students have done other projects for the Ypsilanti Department of Public Services and Depot Town Community Development Corporation. In 2008 they disassembled and rebuilt the Riverside Park dock and gazebo that overlook the Huron River.

This Winter Semester they are working on two additional projects with Habitat for Humanity of Huron Valley. Students are framing a house that was severely damaged in a fire and remodeling another from the inside out.

Since 2010 WCC students have been involved with five Habitat homes and three additional projects for Washtenaw County. Students also will help Growing Hope with their light stands and raised bed again this spring.

Lindemann sees a bright future for construction professionals. According to economic forecasters, construction will be one of the top growth industries in Washtenaw County through 2015.

“The construction industry is coming back. We are seeing real growth in job opportunities and housing needs in Washtenaw County,” said Lindemann. “It is great to be able to give my students the benefit of gaining onsite industry experience through community service.”

More information about WCC’s construction technology program is available on the College’s website.