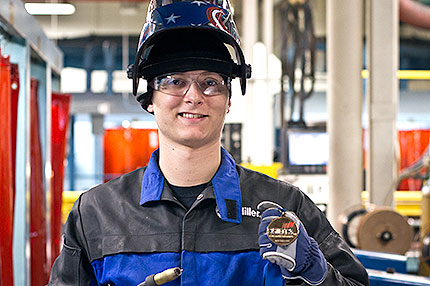 The WorldSkills International competition has become a globally recognized means of comparing world-class competency standards in the industrial trades and services sector of the economy. With more than 50 member countries and regions participating in this WorldSkills event, Pazkowski had the opportunity to compete against some of the best welders in the world.

Because he is left handed, a weld project’s symmetry makes a huge difference when Pazkowski is welding against right-handed challengers.

“Fortunately for me, they changed all of the welds on the pressure vessel to favor a left-handed welder. So I felt extremely comfortable going into competition the second day,” Pazkowski said. “They also took away half of the welding booths this year in an effort to go green. This resulted in shift changes halfway through each day, which added a little extra strategy and change to my competition.”

Pazkowski is the third consecutive student from WCC to win the national title and represent the U.S. in this international competition.

“At WCC, we pride ourselves in understanding what skills employers in the welding and fabrication industry look for, at any stage of a person’s career,” said Glenn Kay II, a faculty member in the WCC welding program and Alex’s coach. “Our program instructors draw on their real-world welding experience within a wide range of industry groups—such as aerospace, manufacturing, oil, gas, and nuclear power—to provide 21st century on-the-job scenarios to the classroom and lab environments.

“I am absolutely thrilled that Alex won the silver medal,” Kay said. “His welding and fabricating skills, coupled with his dedication, commitment, and professionalism, are a testament to what the best of the best bring to the welding industry.” Kay has more than 19 years of experience in the welding industry, and received his associate degree at WCC in applied science and welding technology.

“We are all very proud of Alex’s accomplishments and heartily congratulate him on his outstanding performance,” said Dr. Rose B. Bellanca, WCC president. “He has worked hard and taken advantage of all WCC has to offer, including our world-class classrooms, expert faculty, and great support staff. This is the kind of success story that attracts students and our workforce training partners to WCC and helps encourage others to strive for excellence in their chosen fields of study.”

“Competing on the international stage was amazing for me,” said Pazkowski, who is a resident of Saline. “This had been my goal ever since I learned it was possible to do so. It was a once-in-a-lifetime experience and I'm proud to have done it.”

Information about WCC’s welding program is available on the College’s website.