WCC Board of Trustees extends contract of President Bellanca 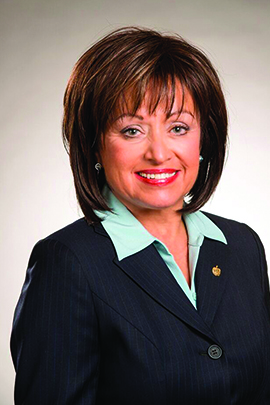 The Washtenaw Community College Board of Trustees voted to extend the contract of President and CEO Dr. Rose B. Bellanca to June 30, 2020.

The vote was held during the Board of Trustees' June meeting. Dr. Bellanca’s 2017-2018 salary will be increased by 1.5 percent to $217,522. She will also receive a one-time deferred compensation payment equal to 5.6 percent of her annual salary during the 2017-18 fiscal year.

“The Board is pleased to extend President Bellanca’s contract and looks forward to the continued success of WCC under her leadership,” Diana McKnight-Morton, chair of the WCC Board of Trustees, said of Tuesday night’s 6-1 vote.

The Board similarly approved a 1.5 percent adjustment to the college's independent staff salary and wage rates for the 2017-18 fiscal year, and wage rates as submitted for part-time support staff, club sports coaches and part-time faculty.

Successes under Dr. Bellanca’s leadership over the past year include:

About Rose B. Bellanca, Ed.D.

Dr. Bellanca is the fourth president and chief executive officer and the first woman to hold the leadership role at Washtenaw Community College.  She joined the college in August 2011.

Her community involvement includes serving as Chair of the Region 9 Talent Council – part of the State of Michigan’s Prosperity Initiative, as an executive committee member of Ann Arbor SPARK and as a board member for the Square One Education Network.

She has served on a national level as a board member of the Commission on Economic and Workforce Development and the Licensure Committee for the American Association of Community Colleges. Additionally, she has held board positions with the Henry Ford Health System, the United States of America Selective Service, Automation Alley, the Economic Development Alliance of St. Clair County, the Blue Water Area Chamber of Commerce and the Metropolitan Detroit Bureau of School Studies, Inc.

Dr. Bellanca is the recipient of several awards, including most recently:

Dr. Bellanca earned an associate in Applied Arts degree from Macomb Community College in Warren, Mich. She went on to earn a Bachelor of Science degree in Family Life Education, a Master’s degree in Education and Industrial Arts, an Educational Specialist certificate in Administration and Supervision, and a Doctorate of Education in Administration and Organizational Studies from Wayne State University in Detroit, Mich.