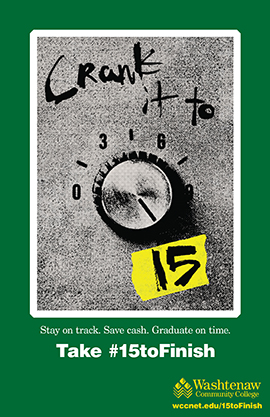 Washtenaw Community College wants students to graduate on time and save money while doing so.

The college is joining the “15 to Finish” initiative, a nationwide campaign encouraging students to maximize credit loads to graduate sooner and spend less money on the undergraduate college experience.

In explaining why she’s encouraging 15-credit semesters for full-time WCC students, Vice President of Instruction Dr. Kimberly Hurns points to research from other institutions’ “15 to Finish” programs that shows a resulting increase in academic performance and a decrease in the cost of attaining a degree.

“We need to be sure our students are aware of the credit requirements necessary to earn the degree they are pursuing and of all the benefits of graduating on-time from those programs,” Hurns said. “We’re encouraging students to sit down with an academic advisor to map out a path to success. That can mean following the ’15 to Finish’ model, or it can mean taking summer courses, but the reality is that taking two semesters per year of 12 credits will not get you there on time.”

The math is simple. Earning an Associate Degree requires a minimum of 60 credits. A Bachelor’s Degree requires at least 120 credits. Taking 12 credits per semester, the number considered full-time by most institutions and financial aid agencies, doesn’t add up to graduation.

12+12+12+12=48. That’s 12 credits shy of an Associate Degree. If students intend to transfer to a four-year institution, the same pace will leave them 24 credits shy of a Bachelor’s Degree after four years.

Why follow the “15 to Finish” initiative? According to Complete College America:

The “15 to Finish” campaign originated at the University of Hawaii, has been championed by many education non-profit organizations for several years, and earned support from the administration of then-President Barack Obama in 2016 to encourage Pell Grant recipients to graduate on time. Prior to the 2017 academic year, Michigan State University unveiled its “Go Green, Go 15”  campaign.

“We understand that it’s not possible for many of our non-traditional students to take an average of 15 credits per semester,” Hurns said. “But our goal is to help the students who are able to increase their class load to do so.”