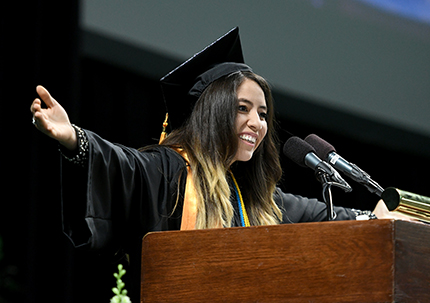 Paula Salazar, the student speaker at WCC’s 2018 Commencement Ceremony on Saturday, takes the phrase “overcoming obstacles” to a higher level. And her goals? They’re a bit loftier than the average students’, too.

“Your struggles might not be the same as mine, but as community college students, we had our struggles and overcame them,” Salazar told those gathered inside the Eastern Michigan University Convocation Center. “You and I can do incredible things when we are pushed to the brink, and today we have proven that.”

Salazar was born into a violently abusive home; fled with her mother to a strange, new land; and regularly went hungry so her younger siblings could eat. Though they had little themselves, Paula and her mother, Elizabeth, would eventually dedicate their lives to those who had nothing.

By her early teenage years living in Belize, Salazar had already committed herself to a life of service, working with programs dedicated to relieving the poverty epidemic in Central America and the epidemic of crime in the “northern triangle” of El Salvador, Guatemala and the Honduras.

She has a very personal devotion to the young children of rural Belize, who live without running water and electricity – and often without food or hope. It’s in these impoverished communities of the Central America country where Salazar’s long path to a degree at Washtenaw Community College began.

Salazar was working as a coordinator and interpreter for nonprofit organizations through her church, Omega Ministries. One of those organizations was Praying Pelican Missions, which Dexter United Methodist Church used to organize its missionary trips to Belize.

Through that relationship, members of the congregation at Dexter United Methodist Church offered to sponsor two years of education for Salazar at Washtenaw Community College. She packed her belongings and was set up with house parents, Catherine and Robert Leadley.

By this time, Salazar’s family life had recovered to a point that she calls “middle-class,” but she doesn’t believe she was likely to have pursued a college education if she remained in Belize. While there, she was too committed to the immediate needs of the cause – often devoting her own wages to the programs with which she was working.

“My whole life, I’ve wanted to serve people in remote areas – especially children and women,” Salazar said. “To be a missionary in those places, I could only do so much. By coming here and earning a degree, I can become a bigger influence on larger groups of people.”

Salazar has capitalized on every moment she’s spent at WCC on her way to earning a Liberal Arts Transfer Associate in Arts Degree with a 3.95 GPA.

In April, she was named one of 47 community college students nationwide – and the only one from Michigan – to earn a highly-selective Undergraduate Transfer Scholarship from the Jack Kent Cooke Foundation. This scholarship will award her up to $40,000 annually for the next three years, which she will spend at either Cornell University or the University of Michigan. She plans to study International Affairs with a goal of impacting policy that will benefit the people of Central America.

Salazar also became deeply involved at WCC, working as a Student Ambassador and with the college’s Student Activities department. She founded the Student Economics Club and was an officer in four other student groups: the WCC UNICEF Campus Initiative; the International Students Association; the Phi Theta Kappa Honor Society; and Project Nur, a student-led initiative that cultivates acceptance and mutual respect between Muslims and all communities.

Salazar’s mother traveled from Belize to be at the commencement ceremony and brought plenty of positive affirmation with her. When she arrived, she had tucked into her luggage dozens of letters from those impoverished children in rural Belize.

Elizabeth Salazar -- who leads Omega Ministries with Paula's step-father, Miguel Salazar -- says the children not only look up to Paula for her accomplishments, but they believe she is on a mission to improve their lives.

“She is my personal hero and a hero in our nation,” Elizabeth Salazar said. “She’s a dream come true for us.”

In her speech, Salazar was blunt in her introduction to some of those letter-writing children:

“Mercedes is a beautiful girl, who at the age of 8 was robbed of her innocence by her biological father and other men from her community. Briani is a 4-year-old who had one of her kidneys removed due to injuries suffered from a beating by her parents. Rosa, at the age of 8, fled to Belize from the Civil War in El Salvador and endured an inhumane journey of starvation; hiding among cadavers to save her life.”

It’s thoughts of those children that drive Salazar.

“Before she came to WCC, Paula worked tirelessly for those children … and she’ll continue to do so once she has completed her studies in the United States,” WCC President Dr. Rose B. Bellanca said in her introduction of Salazar. “But it will no doubt be from a much more powerful and influential position.”