Matthew Burtell was floating in the Sea of Japan when he first contacted Washtenaw Community College. Or maybe he was 2,000 miles south, somewhere in the South China Sea. The U.S. Navy isn’t too keen on sharing the whereabouts of its aircraft carriers, so sometimes even an Information Systems Technician aboard the USS Ronald Reagan isn’t sure exactly where he’s located. 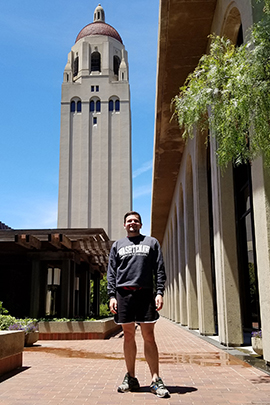 Burtell was nearing the end of his four-year service and it was time to start planning his next steps. Sitting in the ship’s library, the 2014 Saline High School graduate decided to visit the WCC website, clicked “Veterans Center” and made a phone call.

What Burtell didn’t realize at the time was that he was essentially signing up for more adventure and travel, which had been the impetus for joining the Navy. But that’s exactly what a one-year layover at WCC propelled the 23-year-old to pursue.

A self-described mediocre high school student, Burtell said he found his focus in the Navy and came to WCC determined to find academic success. That mission was accomplished, setting up more far-flung escapades — this time focused on more scholarly pursuits.

He’s currently in Palo Alto, California, attending the eight-week Stanford Summer Session’s Veteran Accelerator, the prestigious university’s selective program that develops veterans’ academic, professional and personal skills as they embark upon pursuit of a bachelor’s degree or beyond.

As soon as that program ends on August 18, Burtell will travel from coast-to-coast and officially enroll at Yale University in New Haven, Connecticut, where he’ll study Computer Science; and is considering adding a second major.

“Yale was my ‘reach’ school,” said Burtell, who also applied to Michigan, Columbia, Johns Hopkins and other top-tier universities. “I knew it wasn’t going to happen.”

But it did happen. The steady string of promotions he earned in the Navy helped. As did excelling in a demanding WCC schedule that included 21 credits in the Fall 2018 semester and 19 credits in Winter 2019; all while serving as president of the WCC chapter of Student Veterans of America and participating in the college’s Philosophy Club and its club cross country team, among other extra-curricular activities.

In her role as Academic Advisor in the Wadhams Veterans Center at WCC, Jan Militello works closely with many student veterans. She believes Burtell set a great example for others to follow in his short time on campus.

“So many students I see struggled throughout high school, joined the military, and are on the other side not knowing if they have what it takes to excel in academia,” she said. “Matthew came to WCC not really knowing what he wanted to do, but wanting to succeed. He had huge aspirations and a determined mindset.”

Likewise, Burtell values the support he received from the Veterans Center staff.

“WCC facilitated my goals,” he said. “There’s no way I could be where I am now without the help of the supportive and encouraging group at the Veterans Center.”

Things have moved so fast since Burtell left the Navy that he hasn’t had much time to reflect on everything he has accomplished – following the unusual path from the Pacific Ocean to WCC to Stanford to Yale.

“Maybe one day I’ll look back and say ‘Wow,’ but right now I can’t say that it has quite hit me yet,” he said. “In a certain sense, I’ve just been trying to prove something to myself this whole time. So far so good. Now I have to follow through.”

The Wadhams Veterans Center at WCC was created to serve all former and current active-duty military personnel, spouses and dependents of veterans, and students in the National Guard or Reserves. The center seeks to integrate veterans into the college community by helping with their transition and offering various assistance.

The center is named for Tim and Laurie Wadham for their generous support of the college and, in particular, its services for students who have served in the Armed Forces.