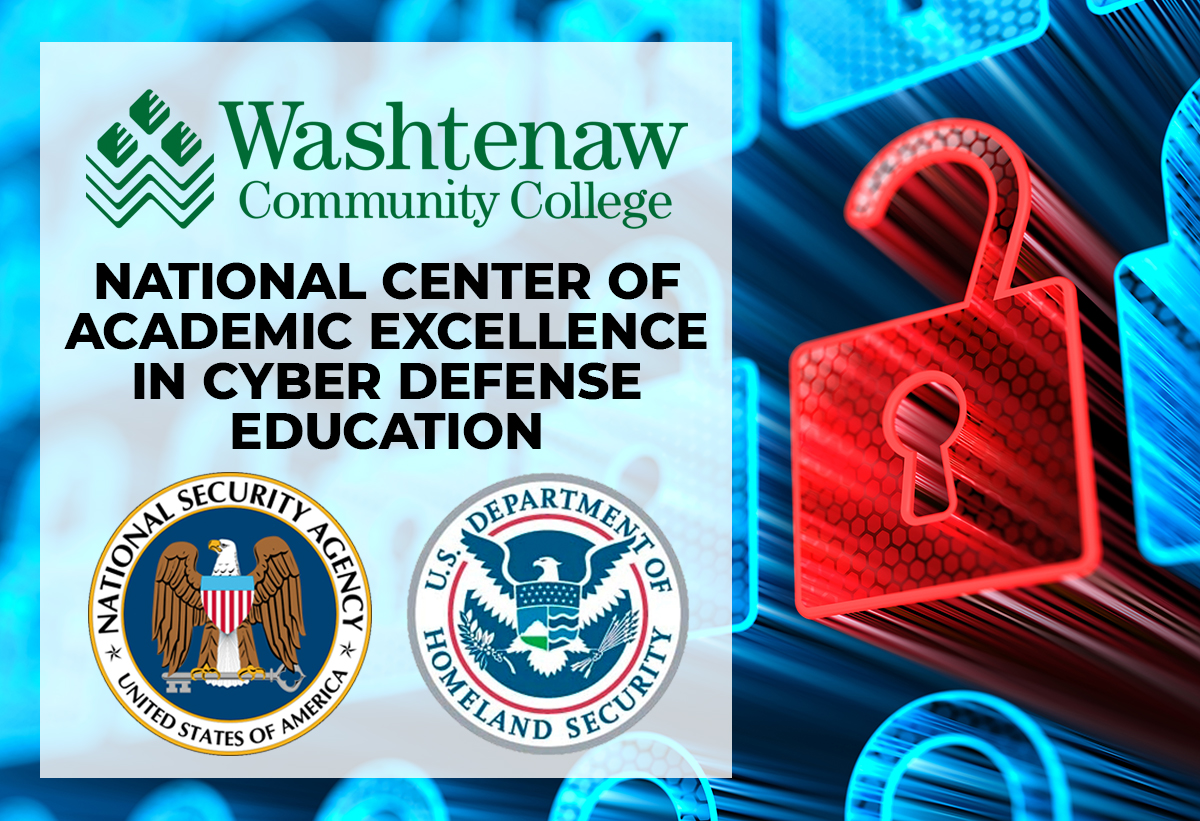 Washtenaw Community College learned this week that it has been designated a National Center of Academic Excellence in Cyber Defense Education by the United States National Security Agency (NSA) and the Department of Homeland Security (DHS).

The announcement places WCC among a select group of two-year, four-year and graduate-level institutions nationwide to receive the prestigious distinction. The NSA extensively reviewed WCC’s Associate in Applied Science in Cybersecurity program and determined it is providing rigorous instruction with the most current cybersecurity industry trends to students.

“This is an important designation for our Cybersecurity program and the college in general, but it’s really our students who will benefit the most,” said program advisor Cyndi Millns, a faculty member and department chair in WCC’s Computer Science and Information Technologies department. “It’s a rigorous standard we were able to meet, which shows future employers that our students completed a program that meets the criteria of the National Security Agency.”

The U.S. Bureau of Labor Statistics has forecasted a 32% growth rate in the cybersecurity industry through 2028, highlighting the critical importance of quality higher education in the field.

WCC has been a leader in cybersecurity education since it became one of the first institutions in the state to offer a degree program in the early 2000s. The current program, which was revamped in 2017, prepares students for an entry-level job in the high-demand field or the ability to transfer to a four-year institution. In fact, the WCC program was designed in coordination with Eastern Michigan University so graduates could transfer directly into EMU’s Information Assurance & Cyber Defense bachelor’s degree program.

Although the designation recognizes the strength of the college’s Cybersecurity program in particular, Millns said the entire college was scrutinized during the months-long application process. She credited the college’s “mindset as an institution” with helping the program achieve National Center of Academic Excellence status.

The goal of the Centers for Academic Excellence program is to reduce vulnerability in our national information infrastructure and defend U.S. government, business and infrastructure sectors by promoting higher education and expertise in cyber defense.

“(WCC’s) ability to meet the increasing demands of the NSA CAE program criteria will serve the nation well in contributing to the protection of the National Information Infrastructure,” said Karen Leuschner, CAE Program Manager. “The National Cyber Strategy addresses the critical shortage of professionals with cybersecurity skills and highlights the importance of higher education as a solution to defending America’s cyberspace. A highly skilled cybersecurity workforce is a strategic national security advantage.”