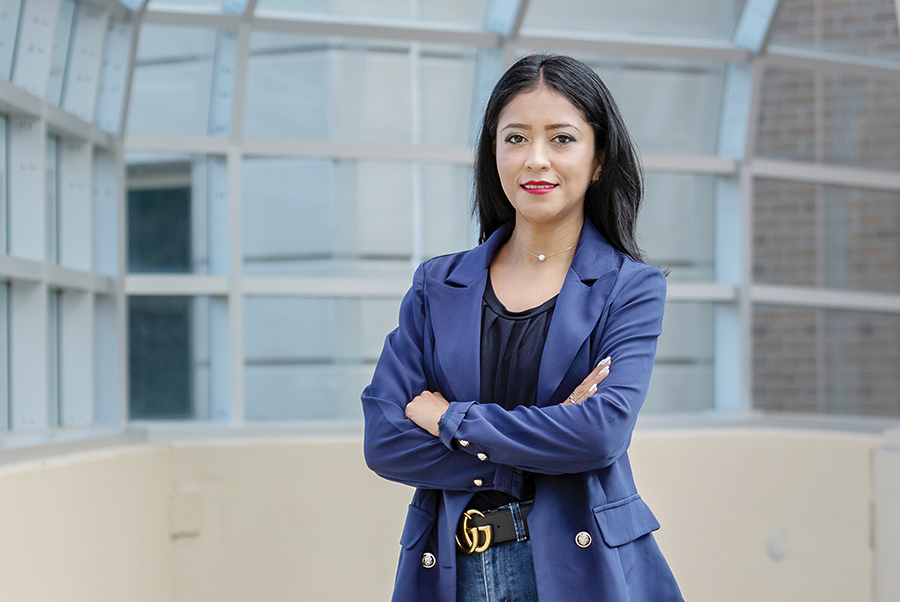 Sometimes, the best laid plans end up even better than anticipated.

That’s the case for Washtenaw Community College graduate Alejandra Hornak, who first came to the college to pursue a career in law enforcement, but is now part of an international cybersecurity firm that travels the globe protecting local governments and other organizations from cyber threats.

Hornak earned a Bachelor of Law degree from the University of Queretaro in her native Mexico in 2013 before a series of moves and life changes, including meeting and marrying an Ann Arbor resident, brought her to our community.

Being a native Spanish speaker with a background in law, Hornak enrolled in the Criminal Justice program at WCC because she believed there’s a need for bilingual law enforcement officers. Her plan was to complete that program and apply to the WCC Police Academy.

However, the topic of cyber law during a Criminal Investigation class piqued her interest and some exposure to the topic as a student intern with the Washtenaw County Sheriff’s Office made it clear the explosion of cyber threats worldwide was opening the door to an entirely new career choice.

“Criminal justice is not only about law enforcement, it’s much broader,” says Hornak. “And the Criminal Justice program at WCC put me in the right place to meet the right people and open my mind to more career options.”

So Hornak completed her Criminal Justice associate degree in December of 2020 and headed off to the University of Michigan to earn multiple cybersecurity certifications.

Combining those two academic accomplishments earned her a role as the Director of Business Development in Latin America for ATR Cyber, which has offices in the United States and the Ivory Coast.

“For me, it has been challenging, but there’s a lot of satisfaction to learn new things,” Hornak said. “I can now have a conversation in both law and cybersecurity and be comfortable on both sides, which is not easy considering the jargon that’s used in both of them.”

Of course, learning a new language is nothing new for Hornak. For the biggest and most impressive twist in Hornak’s story, let’s rewind five years and add this to the mix: When she enrolled at WCC in 2017, she knew very little English and was taking English as a Second Language courses upon entering her Criminal Justice program.

“There were difficulties, I feel like I worked twice as hard as other students because of the language barrier,” Hornak said. “But WCC gave me a huge opportunity to find equity and equality as a student. WCC changed me.

“From being an immigrant who knew no English to having conversations with people around the world — WCC put that world together for me.”