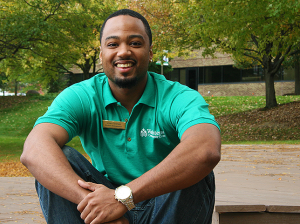 Loren Townes was the featured speaker at the Washtenaw Community College Foundation Scholarship Luncheon on Oct. 9. Looking polished in his crisp shirt, he delivered a moving speech about his upbringing and thanked the Foundation for its support.

The 23-year-old Townes wasn’t always a stellar, scholarship-winning student. He had a rough start to his college career: he dropped out of Eastern Michigan University after his first semester due to what he calls “some troubles.” After bouncing around a few jobs, he decided it was time to go back to school.

“My first visit to WCC, it just felt like the right place to be,” Townes said. The college gave him the second chance he needed. “Now I’m more prepared, disciplined, self-aware,” he said. “When it comes to time management, I have that down. I know what I need to get done and how to get it done.” In addition to a full course load, Townes also has two jobs. He works as a WCC student ambassador, helping new students through orientation, and he is also an assistant manager at a shoe store.

Townes will complete his last semester at WCC in Winter 2015. He’ll go on to the University of Michigan at Dearborn to earn a bachelor’s degree in marketing. He knows his time at UM-D will be different than his first try at EMU. That’s because he’s different now—he’s grown.

He credits the relationships he’s made at WCC as a big part of his personal development. “The professors and staff really care about student development, and they want you to grow,” he said.” Everyone is warm and welcome.”

Townes will miss his home over the past two years at WCC. But he’s looking forward to his next journey at UM-D, and he knows he’s prepared. “If you have the fundamentals down, you can always build on top of that,” he said. “WCC has provided me with the fundamentals.”