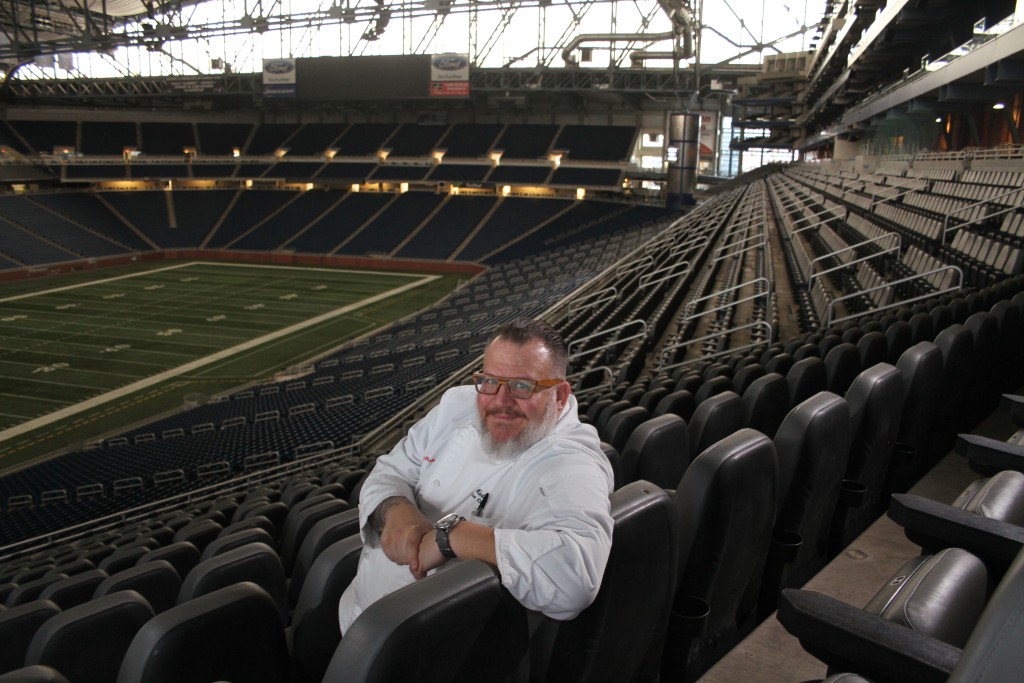 For Executive Chef Joe Nader, cooking for 65,000 fans at Ford Field in Detroit begins with the skills required to feed a single mouth.

Nader, a Motor City native and graduate of Washtenaw Community College’s Culinary Arts program, recalls the richness of his grandmother Angie’s cooking and credits her as a major influence
in establishing roots in the culinary field more than 25 years ago. He worked his way up, literally cooking his way through college while earning undergraduate degrees in philosophy and political science at Eastern Michigan University. While feeding diners at Gratzi in Ann Arbor, a senior chef urged him to consider the culinary field less as a needed job and more as a career.

Following her advice, Nader combined his experience in the industry with a return to the classroom. After exploring culinary programs in New York and Vermont, Nader realized that he had a gem in his own backyard at the college.

“The community college system is a little bit more nimble and better able to react than a four-year institution because instructors aren’t that removed from the industry themselves,” he said.
Nader looks only as far as his backyard to see the growth of restaurants in Detroit. While he doesn’t see a shortage of workers, he does see a lack of training.

“I think the community college system plays a huge part in meeting that need,” he said.

For Nader, the value of attending a community college was obvious. In addition to the affordable tuition, he also knew he could count on quality instruction from professionals in the field.

One faculty member who stands out in Nader’s memory was the late Chef Don Garrett, who is the namesake of the student-run restaurant, “Garret’s” in the Student Center on campus.

“To get a solid foundation from someone like Chef Garrett — and he was a tough cookie — he really helped to prepare me for the real world,” he said. 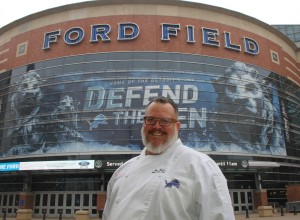 Nader also found value in learning side-by-side with classmates who, like him, had returned to school, bringing their own real-world experience. While coursework is academic by nature, he was able to apply his learning immediately in the kitchen — sometimes immediately after class when he would bus to his restaurant job.

“I was literally in a kitchen for up to 16 hours a day, whether it was in the classroom or at one of my two jobs,” Nader said.

It seems Nader has always been up for a challenge. As a working student, he had a lot on his plate. After years working as a chef in California, he seized the opportunity to cook for the Detroit Lions
in 2006 and he literally has thousands of reasons to stay on as Executive Chef. Nader may have started cooking in the back of a restaurant, but he is now the face of dining at Ford Field.

Hosting 65,000 fans at each game requires that he employs more than 100 staff during football season, not to mention staffing for the 132 suites that each have their own private menus. Feeding
the Detroit Lions team alone demands his oversight of seven full-time chefs. Nader might be a Lions fan during the season, but his work as a chef keeps him busy all year round.

“The only constant is change,” he said. “There’s literally always something happening.”

When Nader is not commanding the culinary scene at the stadium, he can be found hanging out with friends or exploring his other interests, such as acrylic painting and classic cars. From his background in classical culinary training to his interest in travel, Nader expands his world by exploring. He says that travel is “fuel for his fire,” meaning his passion for cooking.

Nader, 45, has seen it all in his career as a chef and that experience helps him in his Ford Field job. He makes sure that there is a steady supply of pizza and hotdogs for fans, but he equally enjoys the challenge of catering to guest lists that have included celebrities from rock singer Perry Farrell to the Queen of England.

With the authority that comes from being an executive chef also comes responsibility. Nader draws upon a wealth of experience to give back to the community. While he does less actual cooking
than he’d like to these days, he has gotten more involved in advocacy around community education and making sure that society continues to support the underprivileged through state-funded food programs like SNAP (Supplemental Nutrition Assistance Program).

In May, Nader spoke to Congress about education on nutrition and cooking being essential to helping food stamp recipients eat healthier and get the most out of their benefits.

“There’s no doubt that my background in philosophy and political science played a role,” he said. “When I went up to The Hill to do advocacy for kids and nutrition, it all came together.”

From cooking and catering to education and advocacy—what is next for the chef? “I’m really fortunate to work with the Lions and Levy Restaurants (which has the food contract with Ford Field and the Lions),” he said. “I just want to continue to learn and I’d also like to travel more. If I can work those two together, I think that would be pretty ideal.”