Distant tragedy and a dream bring student to WCC campus 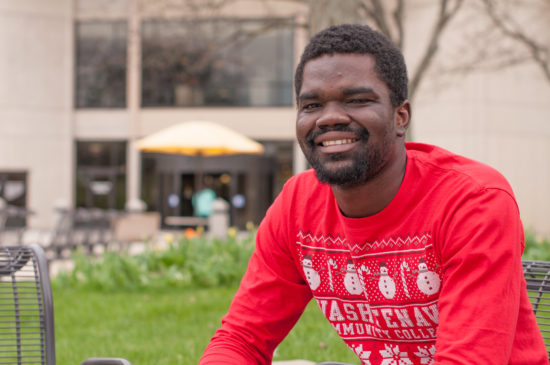 For one student in Kinshasa, capitol city of the Democratic Republic of the Congo, watching a tragedy on the news led to a search on Facebook. And that search brought Paul Arsene Katokwe one step closer to Washtenaw Community College and realizing his childhood dreams.

In October 2015, Umpqua Community College became the scene of one of the deadliest mass shootings in Oregon’s history. As Katokwe followed the news that unfolded in its aftermath, he came across a Facebook tribute by Rachel Barsch, Coordinator of Student Activities at Washtenaw Community College, who sent a tribute to the Umpqua community on behalf of the college.

He then searched the internet for WCC. “I didn’t choose Michigan, I chose Washtenaw Community College,” said Katokwe.

From a young age, Paul Arsene Katokwe told his mother that he would study in the United States, even though they both knew that financial realities could quash that dream. With six siblings, money was always tight for his family and America was a dream away. “My father has a lot of problems, and I am just one of them,” he says with a laugh.

Katokwe was already enrolled at the Catholic University of Congo, but he knew that he would need to put his core studies on hold and focus on his English studies. His hard work paid off, and after just one year with the Education USA program through the US Embassy in Kinshasa, he passed the TOEFL (Test of English as a Foreign Language).

After searching for many colleges in the U.S., he finally applied to three—and when Washtenaw Community College opened its doors to him, he booked a flight immediately.

He had already cleared major hurdles just to get to America when he found a whole new set of challenges—losing his luggage at the airport, braving his first-ever winter temperatures without a hat or gloves, and finding his way from Detroit Metro Airport into downtown Ann Arbor. While asking for directions there, he was mistaken for a homeless person.

But now that he was finally in America, he knew that he would not give up. With the same determination that brought him here from so far away, he knew that with one step at a time, he would find his way again.

One of the first people he met at WCC orientation was Terri Jennings, International Student Admissions Technician at WCC. Jennings said she was surprised to see him just four days after he’d received his travel visa. “It is thrilling to see students like Paul overcome so many obstacles and actually be able to achieve their dream of an education in the U.S., which will open up huge opportunities for their futures,” Jennings said.

But Katokwe has an even bigger dream—using his education to make a difference back in his home country.

“I am not here for myself, I’m here for my country,” Katokwe said. “If I do nothing, who will do it?”

For now, he will focus on his business studies, so he will be better equipped to address the economic issues facing his country, including rampant corruption.

“There are many ways of getting money. Corruption, unfortunately, is one of them,” he said.

In his home country, educators are not well paid, and a bribe for inflated grades can appeal to those teachers needing to feed their families. While Katokwe doesn’t condone this, he is able to provide the perspective of some educators there. “When you are poor, you have a lot of problems to solve, you have your mind on a lot of different things, and you can’t just focus on your students,” he said.

Since attending classes at WCC, Katokwe has had the opportunity to experience a whole new education system in America. In his first semester, he received high honors for his achievements in the classroom.

“WCC instructors are really committed to students succeeding,” he said. “For them it’s more than giving grades. It’s about helping students to reach their academic goals. It’s not always this way in my country.”

Katokwe had the opportunity to be a leader and mentor to his fellow students at the Congo American Language Institute in the DRC. When asked if he sees himself being an educator one day, he says “Of course. Already, I have helped a lot of people with my stories of determination and courage. Failing is not a problem, but not trying is a problem.”

Katokwe’s first application to be a student ambassador on campus did not result in a job, but he was encouraged to reapply after he’d had time to settle in to the WCC community.

Barbara Hauswirth, Experiential Learning Coordinator at WCC, recalls meeting with Katokwe and how she was impressed with his fortitude to push through any of the barriers that stood in the way of him coming to WCC.

“He told me that he wanted to let other students know that ‘Everyone has obstacles to overcome. I had many.  If you want something badly enough you will find a way to pursue your dreams. If I can come here, despite the obstacles, so can you.’ Paul is hoping to become a student ambassador so he could encourage other WCC students with his story of perseverance,” Hauswirth said.

If his past determination is an indication of anything, Katokwe will have even more reasons to share his story on campus this fall.