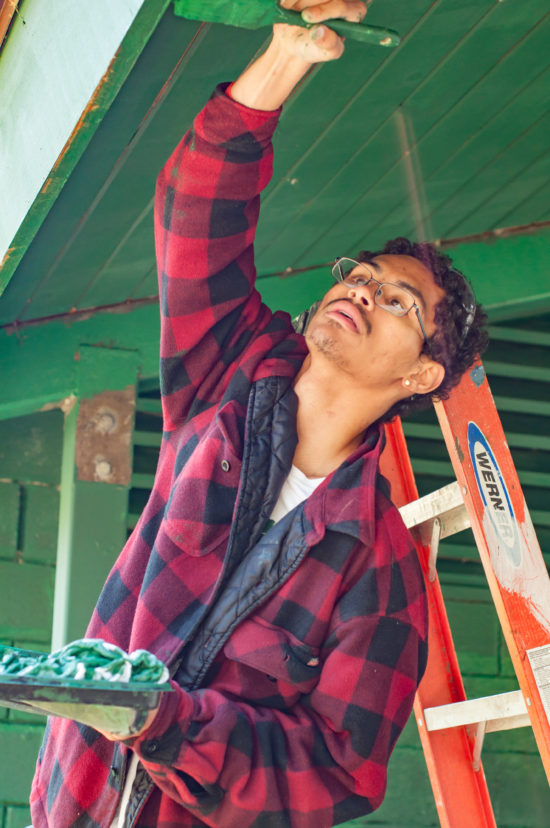 For the past five months, Casey Fox has been repainting community parks and completing various community service projects around Ypsilanti, while working to put the pieces of his life back together.

Fox, 20, owes his newfound success to YouthBuild, a nationwide program aimed at teaching building construction skills to disadvantaged youth between ages 16-24, while they work toward earning a GED. WCC was the only college in Michigan to receive the $899,000 grant from the U.S. Department of Labor last fall.

“This program gave me a second chance. It feels great to succeed,” Fox said. “They’re there to help you and they never judge you.”

WCC welcomed its first round of participants—21 to be exact—to campus in February.

To be accepted into the 22-week program, Fox had to successfully complete a six-day mental toughness challenge, which consisted of reading, writing and math tests, team-building exercises and the task of building a bird house.

“When I found out I got into the program, I started crying,” Fox said. “Since then, my attitude has changed, my grades have improved and my strong mindset is back. It’s a whole new me.”

After completing the program, Fox plans to further his education by returning to WCC, where he will pursue an associate degree in automotive services. Then, he’s off to become a mechanic.

Recently, Fox began working on a tiny house that WCC will use to train YouthBuild students before they begin working on low-income housing in the community. The 164-square-feet house will include a kitchen, bathroom and loft for sleeping.

While on the path to a better life, Fox says being a positive role model to his two younger brothers and making his parents and grandparents proud are most important.

“When I dropped out, I didn’t care about anything, including my future,” he said. “If it wasn’t for WCC, I don’t know what I’d be doing.”

“Many students enter the program with low self-esteem and they’re not used to having anyone outside of their family or community in their corner,” said Cristy Lindemann, department chair of construction technology at WCC and director of the YouthBuild Grant. “Students who didn’t understand the next phase in their lives suddenly want more from their education and are ready to explore various career paths. It’s exciting to see the transformations that happen.”

After completing the YouthBuild program, Fox will attain a GED, construction certifications and an OSHA certification, but perhaps one of the most important things he will attain is confidence and a sense of purpose.
His advice to others who have walked in his shoes?

“Come to WCC,” Fox said. “What’s offered here cannot be found anywhere else. You can still be successful, but you have to want it. No one else can want it for you.”