Bringing stories to the screen 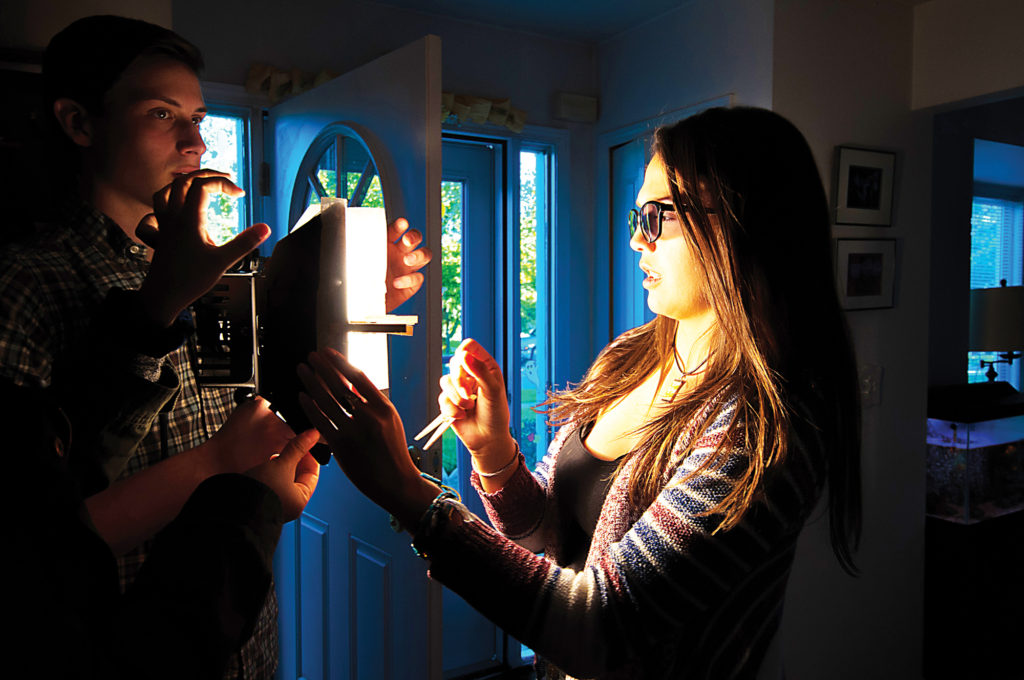 Fewer than one in 10 films are directed by a female. One student at Washtenaw Community College wants to change that.

Her name is Erika Riaño-Mojica.

She’s just beginning her studies at WCC, but Riaño-Mojica knew two years ago that she wanted to study film. And that she wanted to come to WCC before transferring to the University of Southern California, where she plans to continue studying
directing or cinematography.

The last big move for Riaño-Mojica was in 2009 after her mother took a job at the University of Michigan and her family made the journey from her native Colombia to Ann Arbor.

While a move across the world at any age can be challenging, she soon discovered the educational opportunities.

“In Columbia, I would’ve had to spend a lot of money to get into the best school,” said Riaño-Mojica. “It’s not as easy to work in
film like it is here. I want to show the world that women can direct films.”

Riaño-Mojica is ready to work hard so that she can tell the stories of her Colombian community. In October, just weeks into the fall semester, she finally had an opportunity to direct her debut film, “Where Are You Now?”, for a community audience of nearly 300 — an opportunity she learned of through her video production instructor, Dan Kier.

Instructor Matt Zacharias saw an opportunity to extend this real-life experience by requiring students to participate in the film competition, during which filmmakers have just 24 hours to conceive, produce and edit a film.

As dean of Business and Computer Technologies at WCC, Dr. Kimberly Hurns sees the value of sponsoring a community event
like YPSI 24.

“Community is a part of our mission,” said Hurns. “Students tell us that they want more skills, that they want to build up their portfolio, and this is a great way to do that. We are so lucky to have these experiences right out our back door.”

“Mark Ducker has developed this really interesting film competition, right in our community, and it’s a perfect fit for the experience our students want,” said Zacharias.

Ducker, founder of the YPSI 24-Hour Film Shootout, knows that community is a collaborative effort. In the five years of the film competition’s history, growing community support demonstrates the value of its mission that good film can be directed locally.

“The YPSI 24-Hour Film Shootout seeks to add to the long history of filmmaking in Michigan by offering an opportunity for filmmakers to push themselves in a short timeframe to make a short film and compete for significant cash prizes, as well as having their work shown on a screen in front of an audience,” Ducker said.

Successful actor and director Charlene Jeter of Detroit is proof that the film competition can lead to a solid career in film. In 2012, she entered YPSI 24 as a first-time director and has since created many films. Just one day after this year’s YPSI 24 film screening, she headed off to the Premier Screening of the 48-hour Film Project, Toronto, to debut her film, “Zoe and Jess.”

“Women have been storytellers forever,” said Jeter. “I don’t see why creating a film would be any different.”

At WCC, more than one in five students enrolled in the Digital Video Production associate degree program are female.

“The partnership between YPSI 24 and WCC is one that I look forward to growing each year,” said Ducker. “I’m impressed that the staff of the WCC Digital Video Production department see that having their students participate in YPSI 24 is a way for the student filmmakers to get an idea of producing under pressure while they develop their skills and possibly earn a paycheck for their efforts. This is the real-world environment in media production.”

In total, more than 30 WCC students and alumni participated in the film competition.

The first place team in the competition had strong ties to WCC. Peter Harold, Jack Anderson, and Adam Wright attended classes at the college. Their Best of Show film was titled “Cycle of the Blessed.”