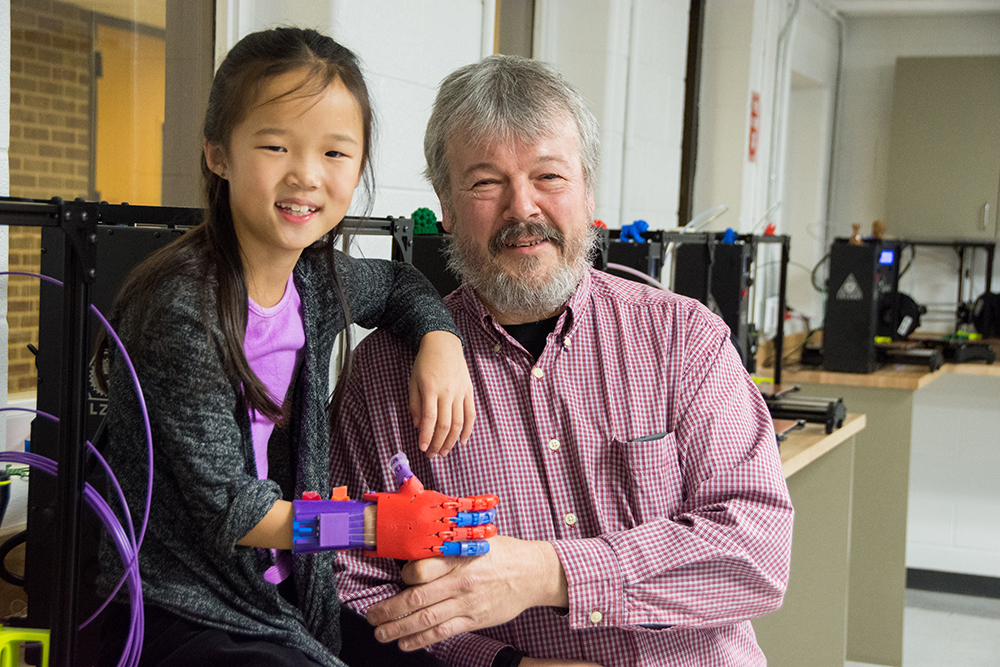 Owen Winkler and his wife, Amy Weaver, can be excused if they think of Washtenaw Community College as extended family. For much of the last semester, the Ann Arbor couple were frequent visitors to the college’s Occupational Education Building. They were there to work with Tom Penird, WCC Industrial Technology instructor, and his students.

In less than a semester, the family watched Penird and his team, using WCC’s latest 3-D technology, create a prosthetic hand for the Winklers’ 8-year-old daughter, Lucy. To say the Winklers, Penird and his students are now close friends is an understatement.

On a recent visit to Penird’s lab, Lucy proudly and confidently strapped the prosthetic hand to her right wrist, extended her arm and picked up a brightly colored toy crocodile.

Lucy smiled broadly, not just because she can use her new hand to grasp objects, but because the toy also was produced by WCC’s new 3-D printers and was in one of her favorite colors — green. 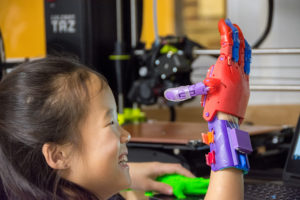 Lucy checks out her prosthetic near the WCC 3-D printers that created the hand. | Photo by CJ South

For the Winkler family, the path to WCC is a story in itself. Owen Winkler, who is a trained engineer, and Amy, had been on the look out for a prosthesis for their adopted little girl from China, who was born without a right hand. The couple had adopted their other daughter, Katy, also from China, four years before bringing Lucy home.

There had been another prosthesis in Lucy’s life but it was big, bulky and extended up to her elbow. It wasn’t easy to use. She soon discarded it.

“I asked Lucy if she wanted to try another prosthesis and she said no,” Owen Winkler recalled. “Then, just last summer, she said she remembered our conversation and told us she would like us to pursue finding a new prosthesis.”

Another search of the internet, specifically a site called eNABLE, opened the door to the latest information on prosthetic hands, including locations of 3-D printers and  the people who could help with the printing.

The Winklers were pointed to the University of Michigan and Shawn O’Grady, Digital Fabrication Specialist at U-M’s 3-D lab. But with classes about to kick off last August, O’Grady recommended the Winklers get in touch with WCC and Penird. O’Grady was a student of Penird’s at WCC several years before.

After meeting with Penird in October, the Winklers were struck by how quickly the instructor came up with a design, even completing components of the hand within a week.

A closeup of Lucy’s new hand. She chose the color scheme. | Photo by CJ South

“I was amazed at how fast Tom had moved on the project,” Owen Winkler said. “I had to do my part and come up with the dental bands and fishing line that also needed to be inserted into the hand.”

Still, adjustments had to be made. Another search of eNABLE produced the name of Krzysztof Grandys, a man from Poland who could help. Photos of Lucy’s arm and wrist were forwarded to Grandys. Using his own software, the new Polish friend of the family was able to determine the best size for Lucy.

A visit to older daughter Katy’s orthodontist, Dr. Betsy Meade, soon produced the special rubber bands. Before long, Lucy was back at WCC to the awaiting class and her many new friends.

“Working with Lucy and her father, Owen, has been a rewarding experience,” Penird said. “Having a project that has a huge impact on the life of another person brings great purpose.”

Because many of the parts coming off the 3-D printer can seem almost toy-like, Penird added, developing lessons that identify the importance of creating value is key.

“Experiences like these allow our students to reason, giving them skill sets for tomorrow’s challenges,” Penird said. “For the students, Shawn O’Grady and me, this project allowed us to look at the parts differently.”

Design needs, control of print details at the surface of the heated plate, and looking at warping issues were all components of class discussion, he said. “I am excited about what tomorrow holds as new challenges bring out the greatness in our students’ abilities to adapt.”

What made much of what Penird and his students accomplished is a direct result of the state’s $4.4 million Community College Skilled Trades Equipment Program (CCSTEP) grant awarded to the college in early 2015.

“We continue to see just how valuable the investment made by the State of Michigan and the WCC Board of Trustees is when they supported the CCSTEP grant,” said Brandon Tucker, WCC’s Dean of Advanced Technology/Public Service Careers. “The equipment obtained through this grant has provided a life changing opportunity and truly speaks to innovative capabilities our students can now access.”

Lucy puts on her hand and takes a drink of water in this series of photos shared by the Winkler family.