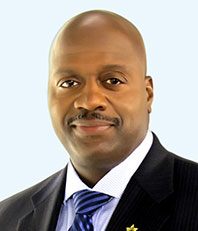 Jerry L. Clayton is currently serving his third term as the Sheriff of Washtenaw County, leading an organization of approximately 420 staff members committed to serving a Washtenaw County population of over 358,000.

Sheriff Clayton has provided training and subject matter expert consulting services to a variety of private and public sector clients, including various Sheriff’s Office and police departments across the country, the National Sheriff’s Association, and the American Civil Liberties Union. He has also served on several Monitoring Teams assessing police agency compliance with United States Department of Justice Consent Decree’s and Memorandum’s of Agreement.

Clayton has received international recognition for his expertise and work in the Criminal Justice profession. In 2016, he was invited as a representative of U.S. law enforcement to attend an international Community Policing conference in Barcelona, Spain. In 2017, at the invitation of the United Nations High Commission on Human Rights, Sheriff Clayton was the representative from the United States and a presenter at an international conference on law enforcement and bias-based policing in Geneva, Switzerland. In February of 2018, Sheriff Clayton participated in a US-UK exchange in London, England, focusing on Building Leadership for Fair and Effective Policing.

Clayton has also served as a Governor appointed commissioner for the Michigan Commission on Law Enforcement Standards since 2013. MCOLES is responsible for developing and managing the training and licensing standards for all law enforcement officers in Michigan. Additionally, he is a New York University School of Law- Policing Project advisory board member, Governor appointed member of the Michigan Joint Task Force on Jail and Pre-Trial Incarceration and the National Association of Counties and the National Sheriff’s Association Reducing Jail Inmate Recidivism Through Continuity of Healthcare Services Task Force. In 2020, Clayton was elected a founding member of the Council on Criminal Justice, an independent and nonpartisan, national invitational membership organization and think tank. Focused on advancing the understanding of criminal justice policy choices and developing solutions that enhance safety and justice for all.

Sheriff Clayton serves on the boards of numerous local organizations including the Washtenaw Area Council for Children, the local Chapter of National Alliance on Mental Illness, the Washtenaw County Mental Health Treatment Court Advisory Board, Washtenaw County Continuum of Care Board (ending homelessness) and the SafeHouse Center. Sheriff Clayton attended Eastern Michigan University, majoring in Public Safety Administration.  He also graduated from the EMU School of Staff and Command and numerous other Leadership programs.

Sheriff Clayton is committed to collaboration with our community partners to develop comprehensive strategies targeting Mental Health and Substance Use Disorders, re-entry for formerly justice involved individuals, restorative justice and support for criminal and social justice reform in Washtenaw County and nationally.