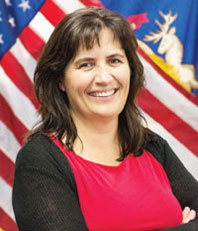 Joyce Nelson VanMeter began her law enforcement career in 1995 as a member of the City of Novi Police Department, serving as a road patrol officer, field training officer, detective, and sergeant during her tenure. In 2008, she joined the Lake Angelus Police Department where she served as a patrol officer, sergeant and lieutenant. Throughout her law enforcement career Joyce also worked as a trainer at the Oakland Police Academy, and served as an Assistant Director of Police Training from 2006-2012.

In 2012, Joyce joined the Michigan Commission on Law Enforcement Standards (MCOLES) as a curriculum development specialist, and then as the chief investigator for the Standards Compliance Section of MCOLES. Joyce came to Washtenaw Community College in 2016 and serves as the Senior Director of Public Service Training.

Joyce earned her bachelor's degree from Madonna University, and her Masters of Business Administration degree from Northcentral University.  She also attended the Michigan State University School of Police Staff and Command.