At the center on May 29, everyone resumed their work of setting the remains in Standard Anatomic Position (SAP), taking inventory, noting any unusual features of the bones and recording their measurements and observations in the Standards forms. 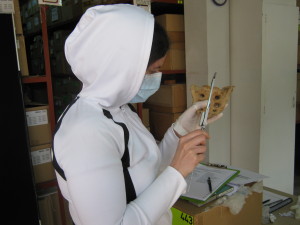 Here is an anthropology student taking measurements of the sacrum.

As for casting teeth, my luck continued to go downhill. The set of remains I left yesterday took a ridiculous amount of time to pry the casting off. Afterwards, more skulls and mandibles grinned maliciously up at me when I removed them from their tissues and bags, their flesh and hair attached. Those skulls with flesh are not the most cooperative with retaining their teeth for the side view pictures.

After lunch, I took a break from the center by going for a walk along the road with Mr. Skufis and a few of the others. During our walk, we came across old excavation sites. What happened was construction workers found the burials of individual mummies while digging a trench for a water pipe. Centro Mallqui came and recovered 75 burials along the roadside.  Afterwards, the empty burial sites were left alone. Some retained their burial’s square configuration, but most were part of the trench. 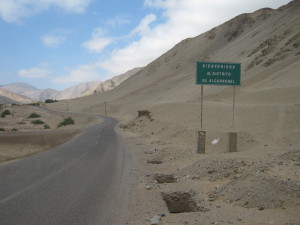 Here is the road to Centro Mallqui with the burial holes left behind from the dig on the previous Peru trip.

We discovered shards of pottery left behind from dig. As Peru frowns at visitors taking authentic pottery from Peru, we took pictures of the shards and left them behind. Still, being able to stay, “hey, we found pottery shards of an ancient culture along the road side in Peru,” is still something cool to share. To see our pottery finds, please see Ilo: Pottery.

The walk revived my spirits when we returned to the center. However, my spirits dropped when Dr. Barrett told me he wanted castings if the skulls and mandibles were good candidates for further study. I reluctantly put the castings on the maxillary (upper jaw) and the mandible (lower jaw) of a fleshy skull. As it reached 4 o’clock by the time I finished putting the casting on, I decided to save the casting tug-a-war between me and the fleshy skull for the next day.