During last year’s Peru trip, some of the students got sick around the 7th/8th day. The pattern held true this year as on June 1, Traveler’s Diarrhea hit our group in various degrees. Therefore, we took our respective medication and proceeded with our usual day of collecting data.

We ended early as Dr. Guillen wanted us to experience a cultural festival. The festival was actually a huge market where we saw women from the higher altitudes of Peru there. in their traditional clothing. At the festival, several of the group members purchased the makings for the guacamole and a carrot concoction we had at lunch. That night, the group member hosted an impromptu dinner party at the hostal.

Our day off kept us busy as we left the hostal around 8 a.m. to drive into Moquegua, the capital of the area. We traveled through the Atacama Desert. Eventually, our van twisted and turned through hills as we climbed in elevation because Moquegua is at a higher elevation than Ilo.

In Moquegua, we paused to pick-up lunch for later before we drove on to Cerro Baul, a plateau which we had the option to climb. 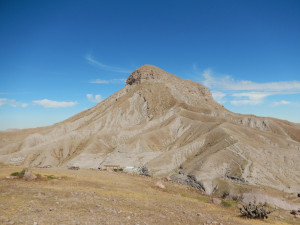 This is Cerro Baul by the city of Moquegua.

Mr. Skufis and three people left to climb the mountain. Some of the group climbed a neighboring hill where Dr. Guillen and her group performed a traditional ritual offering to the mountain. The rest, including myself, waited in a sitting area by Cerro Baul’s entrance.

After Dr. Guillen and the offering group returned, we visited a nearby town while the other four climbed Cerro Baul. We relaxed in a small restaurant, eating some local bread, before we returned to Cerro Baul. This side trip was possible because the climb took an hour and a half up and two hours to climb down safely. Meanwhile, we ate lunch and waited for Mr. Skufis’ group to return. They returned tired and hungry with pictures and videos of their successful climb despite one of the group not going all the way.

We visited another Pisco factory on our way out of Moquegua. This factory brought to mind a Californian vineyard. Beyond the factory was the city of Moquegua with an imitation of the Rio de Janerio’s Jesus overlooking the city. Another place we visited was a cheese factory where a few of the members picked up cheese.