After breakfast, we piled into the van and drove to the Centro Mallqui on May 26. Dr. Guillen met us there and gave us a tour. She showed us a storage room devoted to the findings from archeology digs. Centro Mallqui stores pottery, textiles, mummies, skeletons as well as the remains of dogs (perros), llamas, and guinea pigs (cuy). 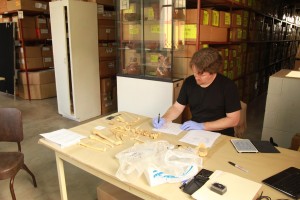 Dr. Barrett fills out the Standards form for partial remains on his table. 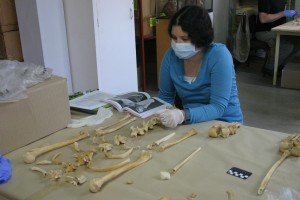 One of the anthropology students consults the Human Bone Book while working on a partial skeleton. 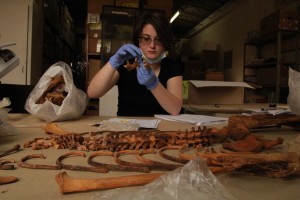 One of the anthropology students works at placing teeth back into the mandible (lower jaw) of the remains she is working with. 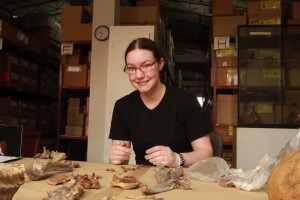 An array of bones sits before the anthropology student who now must take the bones and put them into Standard Anatomic Position (SAP).

The other two students would start on nearly completed remains, sharing a table because of the limited space we have.

My station was two small tables put together where I would take pictures of the teeth and cast them, starting with the ones inventoried last year. 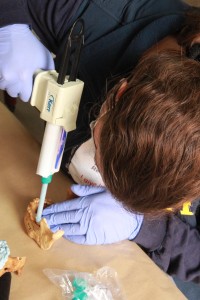 Here I am in intense concentration of applying the goo onto the mandible to cast the teeth. 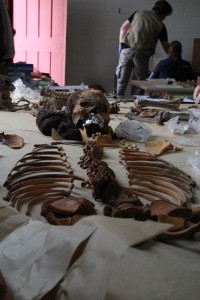 Here is a view of a skeleton in Standard Anatomic Position (SAP) with a glimpse of Dr. Barrett giving me instructions at my station near the door.

It was mostly quiet as we worked. On occasion, we take individual breaks when we are frustrated with the work. We had an official break for lunch, which the center provided us, before we resumed our work.

Our day ended around 4 o’clock when the bus took us back to the hostel. Mr. Skufis then took us to the ‘market.’ It is a place where vendors sell everything beneath tarps stretched across the streets. They sold fruit, flowers, rice, potatoes, toothbrushes, clothes and everything necessary to live. We stopped at a fruit stand where Mr. Skufis bought and offered a leaf-like shell to myself and others to try.

Peeling the shell off was a small, tomato-like fruit. It tasted like a grape, but the flavor was not the same. Mr. Skufis called it a tomatillo. However, the fruit stands are elevated from the street, and the only way to pay the vendor was to stand on a rickety crate. I nearly fell off of it when I paid for the UFO oranges. I am not sure of the oranges’ official name, but they are rounded like the UFO peaches we get in the United States.