May 24 was our travel day. For most of the anthropology students, we got up exceptionally early to get to the Detroit Airport where we flew to Boston, Mass., from Boston to Fort Lauderdale, Florida and then from Fort Lauderdale to Lima, Peru.

After arriving in Lima, we passed through immigration and customs with little to no miscommunication. However, the lines were something else. The line snaked through the man-made barriers to the immigration counters, but the line to the customs’ x-ray machines completely twisted and turned with no set pattern. However, we got through and located our driver who held Dr. Barrett’s name on a sign.

We were reunited with the radiography group and one of the other anthropology students who had been traveling separately and arrived a bit before 2 a.m. in Lima time. 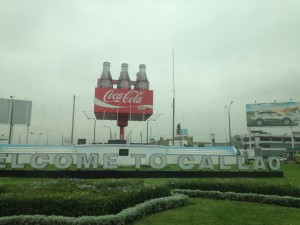 This is the Coca-Cola sign outside the Lima airport, which we saw leaving the airport upon arriving to Peru and the next morning when we left for the next leg in our journey.

Prior to the trip, I imagined Peru in its own little world. However, I discovered Lima’s time is only an hour behind Michigan’s time. It shocks me to realize Peru is both close and far away from home. Staying by myself in a hotel room in a foreign country made me uncomfortable.

However, there are surprises where you least expect them. One surprise was an absolutely huge Coca-Cola sign, which was an actual 6-bottle container of Coca-Cola, outside of the Lima airport.

Peru is very different, but the trip will definitely give us all stories to tell of our adventures down in Peru.