We began our first full day in Peru with breakfast at the hotel. I think of cream for coffee being cold. However, steam rose from the creamer as I poured it into my coffee. Apparently, the milk, or la lache as it is known in Spanish, is served hot. I have never seen hot milk used in coffee prior to the trip.

We returned to the airport where Dr. Guillen and her husband joined us on our flight from Lima to Tacna. Tacna is one of Peru’s most southern cities and is the closest to Ilo. As we descended to land in Tacna, Dr. Barrett commented it looked a lot like Tatooine because of the city’s sandy colored buildings. Standing on the tarmac, I was awed by how Peru has sand dunes, mountains and snow on the mountain’s summits all in the same place. Snow is something I did not imagine seeing in Peru.

After we exited the airport and piled into a van, Dr. Guillen requested the driver to take us where we could get empanadas for lunch. The empanadas came in four types: queso (cheese), carne (meat), pollo (chicken) and triplo (an empanada with all three fillings in it). The empanada de pollo I ate had an extra surprise: a pitted olive. I could not help but wonder why there was an olive in my empanada. The Spanish introduced olive trees to the area, Dr. Guillen explained as the van drove through the Atacama Desert. 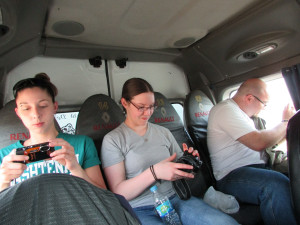 During the ride to Ilo, WCC students check their pictures and snap a few more out the van’s windows.

The desert’s landscape constantly changed during our drive. On our right, it switched back and forth between sand dunes and mountains. On our left, the Pacific Ocean’s waves crashed onto beaches and lava rocks while buildings occasionally cluster near the shoreline. Dr. Guillen explained the people who had lived in the higher areas have been moving towards the coast because of the climate change.

We parted ways for the day with Dr. Guillen and her husband when we arrived at Ilo at our hotel, the Hostal Torrelio. Prior to the trip, I imagined cramped quarters and floors you would not walk on in bare feet. I was pleasantly surprised by the space and how clean the room is. 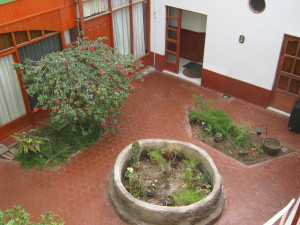 Here is a view down to the beautiful courtyard in our hostal.

We dropped our things off before Mr. Skufis gave us a tour of the town.

During the walk, it was also clear to me that we would be obviously be spotted as tourists.

Everyone else has darker skin, dark hair and were short.

It is slightly unsettling to realize you are the one who is different from the locals in such a stark manner.

Now that we have arrived, our work begins first thing in the morning at Centro Mallqui.