I’ll say it outright: I love Vikings. I love everything about them, down to the teeniest of details. If someone looked at my bookshelf, about half of one shelf is dedicated to them. And because of this, York has been one of my dream locations for visiting for about five years now. It’s not too hard to imagine how ecstatic I was when I found out we were going to York as part of our study abroad trip. York was like the quintessential capital of the Viking occupation of northern England, and there’s still remnants of them in the names of streets (anything ending in –gate, from gata or road in Old Norse) and in some of the uses of speech in the Yorkshire accent. Nerding out aside, York is an awesome combination of fairy tale tropes, haunted places, madhouse Gothic architecture, and a party that doesn’t stop until it’s well past decent hours. If you’re big into Harry Potter, imagine a city-wide Diagon Alley. In some places, there’s never been an attempt to modernize the medieval looks, and judging by how people from York are, there never will be. The people of York are proud to live there, eager to make fun of themselves (their accent is something I called Scottish Lite), and quick to put anyone else down if they make fun of them. In short, York is awesome.

I absolutely sound biased, because I am. York was my favorite city of the whole trip, and I spent every hour that I could, to the point of literal exhaustion, exploring every square inch of the place that I could reach. I didn’t want to waste a second.

(Dr. Rush pointing out exactly why there wasn’t any time to waste.)

York ended up being one of those cities where you have to pick your battles, as there was absolutely no way to cover the entire thing. Mostly, I just followed Dr. Rush around like an awestruck duckling while he managed to navigate the labyrinth that is the city. Generally, everything is concentrated around the York Minster; a cathedral built starting in 1220, although there have been cathedrals on that site since the 7th century. Once you’re at the Minster, you can pretty well find your way around.

We started at the Shambles under Dr. Rush’s recommendation. The Shambles is actually a short road in central York, almost too small for car traffic, with a cobblestone road and houses and shops that are so close together that they’d probably be considered a fire hazard back in the U.S.

They really play up their Harry Potter aesthetic like no one’s business. Fortunately, Dr. Rush is a fan of Harry Potter so the mutual geeking out happened.

From The Shambles, we navigated our way to the Minster. It’s hard to miss, honestly, being the tallest building around by far. The York Minster is essentially a love song to Gothic architecture, and was built after a fire presumably in an attempt to compete with Canterbury Cathedral. Again, I’m biased, and I think the Minster kind of wins that rivalry, although maybe not as much in historical value (the Minster doesn’t have any martyrs in it, as far as I know). But their attempts to make it beautiful and to have the whole building tell a story won out in spades.

It has just about everything you expect a Gothic cathedral to have; flying buttresses, gargoyles, rose windows full of stained glass, sentinel guardian pigeons, and spires on every available roof surface to make it look like an enormous pincushion. I could go on in detail, but I’ll let you infer for yourself how absolutely amazing it is. 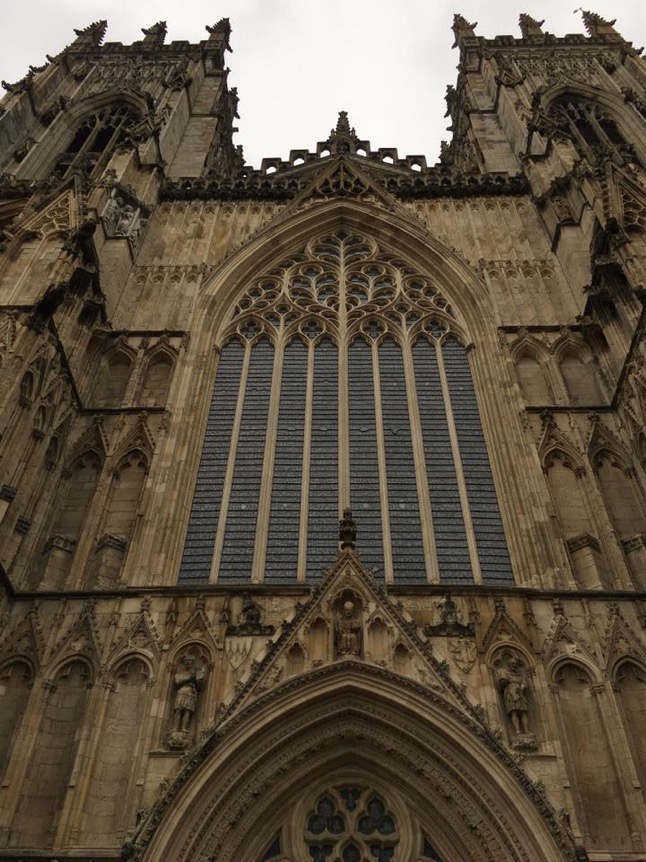 Of course, the place is prime for a photo op.

From there, we wandered around York and made some pretty valiant attempts to get onto the town walls surrounding the oldest part of the city. In the attempt, we managed to find a pretty nifty house known as the King’s Manor, originally built for the abbots of York Minster until Henry VIII dissolved it for that purpose and retooled its use for governors and important political allies. Nowadays, it’s used for the University of York’s Department of Archaeology and the Centre for Medieval Studies (or, more accurately, exactly where I want to be in a few years.) Architecturally, the place is gorgeous, and the weight of its history is impressive.

Eventually, we made it onto the walls, which afforded us some really incredible views of old York and the Minster. The walls are marked along the way with historical landmarks, like the site of the original Roman fortress gateway (now a ditch near a road), and the best place to view the Minster. It’s a beautiful walk on its own, but knowing that we were walking on a medieval wall, and a Roman wall by proxy was amazing. It really gave you a sense of how deep York’s history really went.

We ended the day with a ghost tour, which I think is one of the best ways to really get to know a city. York has no lack of haunted places and ghosts, and fortunately, we had an awesome tour guide named Pat to show us around. Pat was the pinnacle of a York resident, with the accent, the general disdain for the entire city of Leeds, and a very dark and dry sense of humor. Dressed in a black suit and putting his theatrical ability on full blast, Pat led us around old York bit by bit, introducing some of York’s most famous spectral residents like the highwayman Dick Turpin and famous York resident and rebel Guy Fawkes. York is touted as being one of the most haunted, if not the most haunted city in England, and after the tour, it wasn’t hard to imagine how it got that designation.

We finished out the night at the Minster, where the tour ended. There, I like to think we got a sign as to how awesome York is.

We scattered for the night, although most of us were pretty exhausted, and with the Viking Center and the train ride to Vindolanda the next day, we needed as much sleep as we could get. York on a whole, however, is a lot like its newer cousin, New York City, in that it never sleeps. And with the long nights on account of the almost-but-not-quite Midnight Sun, it was a continual party, or at least from what we could hear. 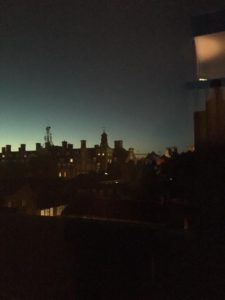 The next day was the one I had been waiting for; we finally got to go to the Jorvik Viking Centre. The Viking Centre was found on the remains of the Viking town of Jórvík, from where York gets its name. Archaeologists found the remains of the town, along with thousands of artifacts ranging from the famous Coppergate helmet to the world’s largest human coprolite (that is to say, uh, bathroom remains from a very, very sick Viking.) Jórvík was a wealth of information, and after some reconstruction following massive flood damage, we were able to see the new center for all it was worth.

A lot of focus at the beginning was on the archaeological value of the site. A glass floor separated us from a reconstructed view of the site to give an idea of how it looked when archaeologists were uncovering it. From there, we got onto a ride (!) that took us, very Disney style, around a reconstructed version of the town. There, a guided audio tour explained what we were seeing, with farmers, craftsmen, storytellers, sailors, and everyone in between. Jórvík was brought to life through animatronics and heavily detailed buildings and environs. They managed to not just recreate the town in sight, but also in sounds and smells (which was not always a good thing).

The ride let off into the museum, which featured artifacts from every aspect of Viking life; hygiene, entertainment, transport, crafting, religion, and warfare were all represented. The presenters were in full costume, and very enthusiastic about what they were showing. I talked to one presenter, actually named Ragnar (how cool is that!), who talked to me at length about how he got into Vikings and how he still incorporated what he loved into what he did every day. I was allowed to hold an actual horse bone ice skate and a piece of what would have been an amber necklace, as well as a replica of a Viking bone comb. I think if I had stayed talking any longer, someone would eventually have to have gone in and dragged me out by force.

All in all, and reiterated, York was by far my favorite city. Between the sheer amount of history shown in every aspect of it, down to the accents of the people who lived there, and the almost dreamy and fairy tale-like aesthetic of the whole place, it stole the whole show for me. I have no doubt I’ll be back there someday, either as a tourist or as a future student and resident.