Today is our first day back in the “trenches” after our trip to Edinburgh. It’s actually pretty nice to be back in Vindolanda. It’s funny that we’ve only been here for a week but it already feels like home. Each morning begins with a home cooked breakfast from our Northumbrian housemaster Pauline. Pauline is, in a word, awesome. She is equal parts terrifying, loving, loud, boisterous, caring, and altogether great. She keeps us all grounded and fed, threatening to murder anyone who tracks mud into her house one second then doling out hugs to anyone feeling down the next. On top of this, she has served me some of the best meals I’ve ever had. This morning also has the distinction of being Devin’s birthday. Someone, I’m not sure who to be honest, bought her some balloons and a banner. It was nice to see; she has done quite a bit this trip to help others out, was nice to see her get some recognition.

After breakfast, we make the hike up the hill to the dig site itself. It starts by walking through the most idyllic garden and brook this side of Eden. We then have to climb a monster of a hill, but it gets easier everyday. Once at the dig itself, the work begins. We are working on uncovering an ancient Roman road and facility. Though I haven’t been lucky enough to find any myself, I have seen people pull out wooden tablets that still bare Latin written nearly 2000 years ago, and Roman shoes that look like they could still be worn. Basically the method is, one or two people will get into the trench and shovel out chunks of material that then go up to a network of wheelbarrows where a team sorts through them looking for archaeological gold. Though the shoes still evade me, Kim and I did manage to find some very big pieces of leather. I guess as much as I’d like to pull up a Roman Nike, I’ll settle for a big hunk of two thousand year old cow skin. 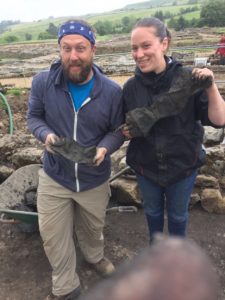 We broke work early today to attend a lecture by an anthropologist who was an expert on bones. Was pretty interesting stuff as she laid out to a us a lot of the info that can be gained from remains such as sex and age. She then tasked us with reconstructing several skeletons and examining several more to see what type of information we could gather. With us during this task was the Canadian field school. We weren’t in direct competition with them per se, and maybe I just have a secret competitive nature, but I like to think that we held our own against them!

After the work and lectures we head back for, first and foremost, a much needed shower. Afterwards, we are treated to another great home cooked meal. Tonight was lasagna, though apparently it’s known as “minced meat” here. I truly haven’t been fed so well in ages. After dinner, I think, is one of my favorite times. It’s time to kind of for all of us to decompress and reflect. Sometimes, we’ll go out and explore the countryside a bit, some nights I’ll break out the guitar and we’ll play some music, some nights we played games, and other nights we could just stay up and talk, enjoying each other’s company. 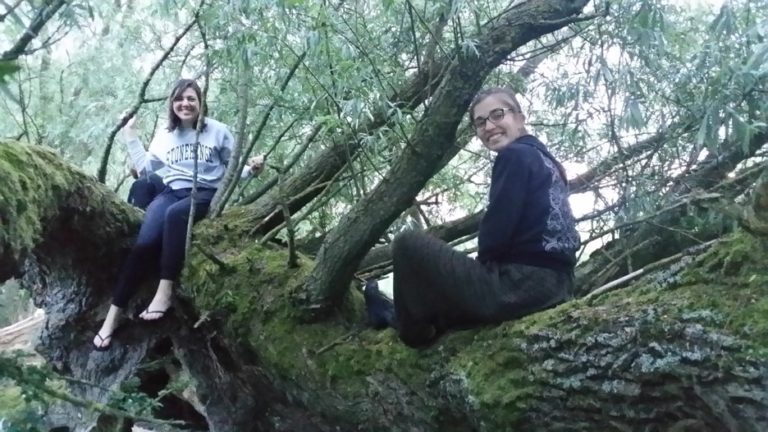 All in all, so far this has been an amazing trip. I’m overjoyed to still have a week left. The work can be hard, but fulfilling. There is definitely the feeling of the “thrill of the hunt” as you can possibly touch something buried for nearly two millennia. The unexpected bonus I did not expect is more of a personal one. There is a sense of camaraderie and family, of everyone banding together in one endeavor. I myself have improved relationships with existing friends, and forged much deeper connections with some then I ever could have anticipated, and even now, I know it’s going to tear my heart out when we all split. But I get ahead of myself, there’s still a week yet, and there’ll be time for that later. For now, it’s time to focus on what I may find tomorrow. Daddy wants a new pair of shoes.