Second to last day on the site, to see a small site trench transform into a ditch was amazing in only 2 weeks. Through hard work and a lot of sweat it has progressed so far. From a clay layer to the silty sticky mess along a rock berm, this trench was quite a challenge. Having learned how to productively move earth Shawn and I got to work. We were taking any excess dirt away from the rock berm down to the silt layer and then exposing the rocks that make up the berm. This process involved pick axing; you hear a solid ting of metal on rock with every swing. Clean up the earth that was freed and sift through it by hand to find any artifacts. Most commonly we found bits of pottery and bone.

After a good section had been freed, we broke for lunch. A bologna sandwich, gross, but I was hungry. After smothering it in mustard, I ate all that was given to me and went back up the fun-sized hill toward the trench.

We began using spades and moving any amounts of dirt in-between rocks to make using a trowel more practical. There it was, a little black circle, a game counter. My first small find staring me right in the face. I was skeptical at first but Marta was passing by at that moment. I asked her if the piece was anything and she smiled and said, “finally you found me something!”, I held the stick of destiny and documented my find. Spirits lifted, my trip seemed worth all the hard work for a black piece of clay the size of a dime. 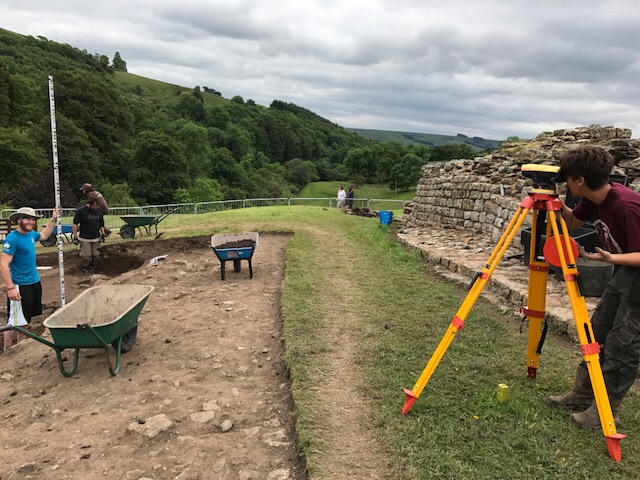 I switched with Shawn to give him a chance at the Berm wall. I started sifting through the dirt and after a short time, I found something oddly white. I called Shawn over and asked if he had any ideas on what it could be. After deciding that we had no clue, we had Marta check it out. It was strip of lead, another small find and Shawn’s turn to hold the stick of truth. Once we finished documenting, we took tea time and I shared our finds with the others. After tea was trowel time.

My skills had improved greatly from the first week, thanks to watching Wouter, the 12 year veteran archaeologist of Belgium who was doing this two weeks as a vacation. We finished out the section we had started that day and met up for our trip summary night in the cottage. We shared pictures and reminisced over the past three weeks, all of which seemed so far away. We laughed, we cried and we felt like a family. This was a grand adventure that I think none of us wanted to end.