When I first got my flight information for this trip back in December of 2016, I had a moment of wondering, first of all, what was wrong with me in the sense that I was subjecting myself to what amounted to twenty-four straight hours of travel; a drive to Windsor Airport, a connection flight on board a metal tube thinly disguised as an airplane to Toronto, a long and drowsy layover, and then the pinnacle trans-Atlantic flight into London Gatwick. All told, it wasn’t all that bad, and aside from peeking out of the airplane and seeing the midnight sun at one point, it was all worth it for the first glimpse I managed to get of England.

I’ll admit, I was both exhausted and giddy as soon as we got in, and figuring out the royal tangle that is Gatwick is an Olympic sport that needs to be considered. I was also combating the head rush of I am literally in London right now every time I looked anywhere.Honestly, it’s not hard to get poetic in a place like London. People have been going on about it for centuries, and I feel like I got caught up in it just as much. Even in just the few hours we had during the day (and racing against the beast known as jet lag), I got it in my head to see as much of the city as I could before someone either dragged me back or I just up and passed out. This kind of ended up being one of the biggest themes of the trip for me.

It might be worth mentioning the hostel, since it was home base for a few days. We stayed at the Wombats Hostel in the Whitechapel District (of Jack the Ripper fame), which was absolutely awesome. Our room, which I shared with Kim, Robin, and Julia, was spotless and comfortable, which really is all that mattered when it came to trekking from one end of the city to the other. It was in a pretty central location, essentially right around the corner from Tower Bridge and the Tower of London. The highest point of all of it was how close Wombats was to the Aldgate East Underground station, which definitely helped in all the travelling we had to do.

So the Underground, right? Kind of possibly the best transportation miracle that has ever happened to this hemisphere, because automobiles are downright sorry in comparison to how fast the Tube launches you from Point A to Point B, effectively bypassing some of the worst traffic and possible pedestrian incidents. Our group relied on the Underground more than anything during our time in London, and I like to think by the time our London trip was over, we had gotten pretty savvy at working out which stations to go to, where to switch, and where to end up. Pretty awesome considering we were working with this: 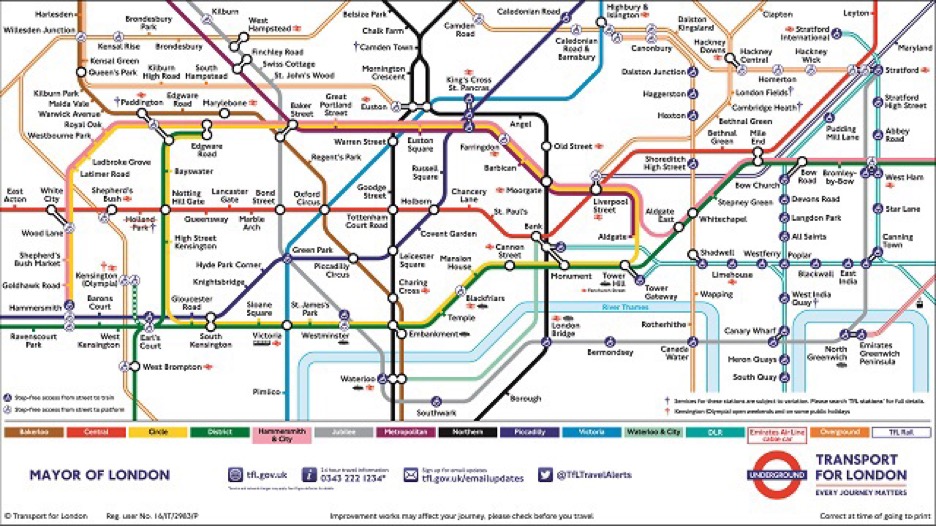 Legitimately, by my last day, I was having conversations like, “Alright, we’ll take the Jubilee Line until we have to switch to the Canary Wharf DLR and we’ll go until we’re off at Cutty Sark and Maritime Greenwich.” It made perfect sense by that point.

Naturally, at day one or two, we were still trying to find the Rosetta Stone to understanding all of this, but I think we did pretty well!

(The greatest combination of shapes that you’ll ever see in London.)

It also gave me the initial feeling of having another layer of London under your feet at all times. The Underground is just a part of a much larger network of tunnels and spaces and heaven only knows what else.

All told, from just a few days in London, it really is just too much to see and comprehend in such a short amount of time. You can hit all the big touristy areas of course, and get your standard pictures of Big Ben and the Houses of Parliament, or a double-decker bus (there’s so many that the novelty wears off after a day), or the London Eye. But even spending time at those places is just a window into something else that you didn’t know, or didn’t see. It’s such a multifaceted city, and just a handful of days can’t even begin to cover how much there just is of London.

There’s plenty more to say on the topic, and I’ll try to go into more detail on some of the best parts of our London trip later on, as well as the pretty rocky political situation we found ourselves witnessing. All told, just the first two days alone were an experience in themselves, including realizing that London requires something like acclimatization, because it’s undoubtedly its own world.