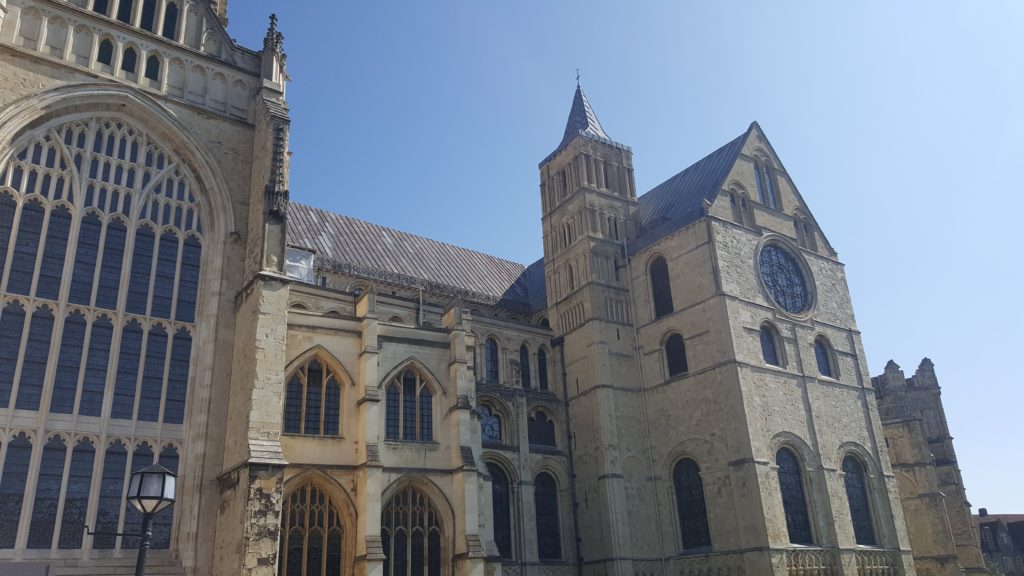 Going to Canterbury Cathedral, I was instantly brought back to a part of my childhood. Growing up catholic, I was constantly surrounded by Gothic architecture, stories of Jesus and saints, and the smell of ash filling up my nostrils. Though the ideology has escaped my life as I got older, an imprint of the culture has remained. Seeing the long walls, reaching towards the heavens and the intricate stone work, transports me to a child-like state, of awe and wonder. Our tour guide, who possessed that perfect amount of English wit, explained how Medieval travelers would marvel at the size of the cathedral and in seeing something so majestic, would bring them closer to god. I feel that this is something my grandmother would have loved to have seen before she passed away some time ago.

It is true, when he said, that you can really only experience the cathedral for the first time, only once. The main, sitting area is a massive space in front of an elaborate choir section. To get into each room of the church, you have to enter spiral, stone staircases and cross long, arching hallways; each room is as large as the next, full of priceless stain glass and ancient graffiti that celebrates a era of religious devotion and a fear of mythical beasts. Within the bottom of the church is the crypt, the oldest part of the cathedral. It is a space that is kept noise-free, so that the patrons can have an area of meditation and peace while they recite prayers or just sit in a realm of thought. The crypt is dark and cavernous, centered around a dimly-lit chapel; the ceiling is kept up with old, roman arches which are now stained with age. Canterbury in itself creates a timeline of architecture; each level is a phase in the evolution of building. The crypt, at the very bottom, is full of archaic forms of building: arches and columns; while, as you ascend the stairs, you start to see Gothic styles, such as pointed arches, ribbed vaults, and outside examples of the flying buttress. At the very top, the ceiling of the cathedral, there is an example of the high point of Gothic architecture; thinly carved ribs that feather all around.

Canterbury, the town, was a trip on its own. The cathedral is surrounded by a small village that caters to tourists and a trendy, progressive population. As a group of us were sitting down for a bite to eat at a local pub, we could hear chanting echoing from the streets; a gaggle of young kids, possibly teenagers, or preteens were marching up and down protesting the existence of global warming. They didn’t really have something new about the issue or even propose anything that should be done about it, but they were riled up about that fact that it is happening. While this was going on, we were treated to some music by a bearded, busker hammering away at an old Fender, acoustic guitar. He began to give a rendition of “Take Me Home, Country Roads,” by John Denver, delivered in a bombastic croon. It is worth paying attention to, that while we are in a different country, culture remains the same; songs are all from the same bands, clothing is the same, language is the same, so if you zone out for a moment, you can convince yourself that you never even left the United States.