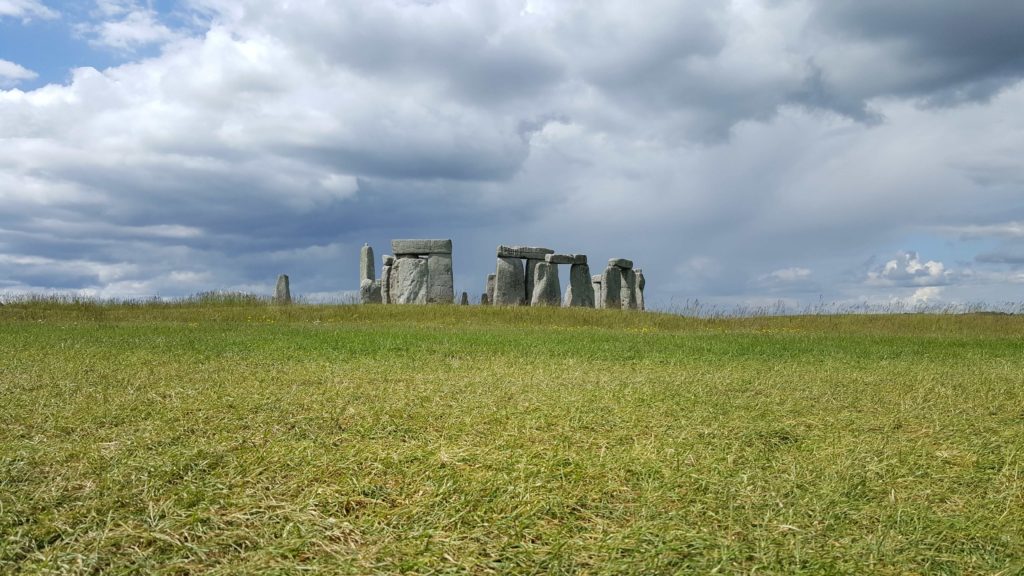 Stonehenge is a site that most people hear about, and in the minds of the young and old, it is imagined as something magnificent and ancient. For the most part, it is all of those things; it really does spur all the mystery and acclaim it receives. Though when you approach the megalithic stones gathered in the middle, you are swept up by the wind, sheep and the miles of empty grassland. There is nothing truly more remarkable about Stonehenge than the location; it sits alone, accessible only by a long, nausea inducing drive over hilltops, speeding past unruly drivers.

Our journey there began with a race out of London, in an effort to make it to Salisbury in order to tour the cathedral. Dealing with the traffic made us a little late, partly because there was just blockage, but also because it seems that there is no speed limit. Drivers will just go as fast as they can down winding roads, blaring their horns at any oncoming obstacles. The driver that I had, seemed to be very calm even when he had made a mistake. Admittedly, I’d be very nervous if I had to make those turns as he did, squeezing through buildings and small roads just to straighten out the car.

Once we finally got to Salisbury, we were greeted with another small, stony village, hidden in the countryside. The cathedral rose from the small houses and buildings, looming over Salisbury, watching over like the traditional, catholic entity it was. Not as large as Canterbury but still as impressive, the Salisbury Cathedral possesses the most legible copy of the Magna Carta. Interesting seeing as it was “discovered” in the basement of the church, perfectly preserved, compared to the charred remains of the other three. The document is no doubt spectacular, to see how straight each line of handwriting is. I can imagine the scribe working for hours upon hours, carefully drawing each letter in the squared, medieval font. People of that decade, derived of any modern technology, must have had nothing to do for years but sit there and meticulously work on a craft. If you messed up on a single punctuation mark or misspelled a word, you would have to start all over and spend the next abysmal hours under candlelight writing the same thing, over and over again.

In the center of the church is a huge model earth that was erected in order to celebrate the moon landing. The structure is called “Gaius,” and it fills the center, continuously spinning, and playing recordings of the astronaut’s transmissions. Gaius in a way, is the link to the cathedral and the actual heavens that the building ascends to. Further is the tombs of the passed, possibly famous, individuals of Salisbury; rich folks who had paid, back then, for stone statues to accompany their decaying bodies, along with others who opted to be buried in the ground. It is interesting to point out that the whole church sits on running water. Every now and again, they take an actual ‘dipstick,’ shaped like a cross to check the water levels. It seems that they had flooding back in the 1910s, according to small plaques that mark the levels of the flooding.

After Salisbury, we drove on the outskirts to visit Old Sarum, an Iron Age hillfort, and the first location of the cathedral. The fact that an old military fortress, used as recently as World War II, has now been converted into somewhat of a park; as families take walks around the dilapidated walls and picnic by the trench. It just goes to show you that eventually wars will end; no matter how bloody things can get, as time goes on, they turn all the battlegrounds into historical sites, and where millions of soldiers had lost their lives, they will erect a sign that permits the use of drones.

As we venture back into the city, I start to hear the cars and the people and smell the aroma of food and urine. After taking a day, out in the country, I long for it like a drug. The rolling hills and beautiful scenery is how England really is; along the roads are old cottage houses with Union Jacks flying over top, and a sense of true pride. There is a simplicity out in the country, coupled with an unbridled majesty, beckoning my American soul, and in a brief moment, made me want to feel like a true brit.