WCC's Sandy McCarthy is Academic Librarian of the Year 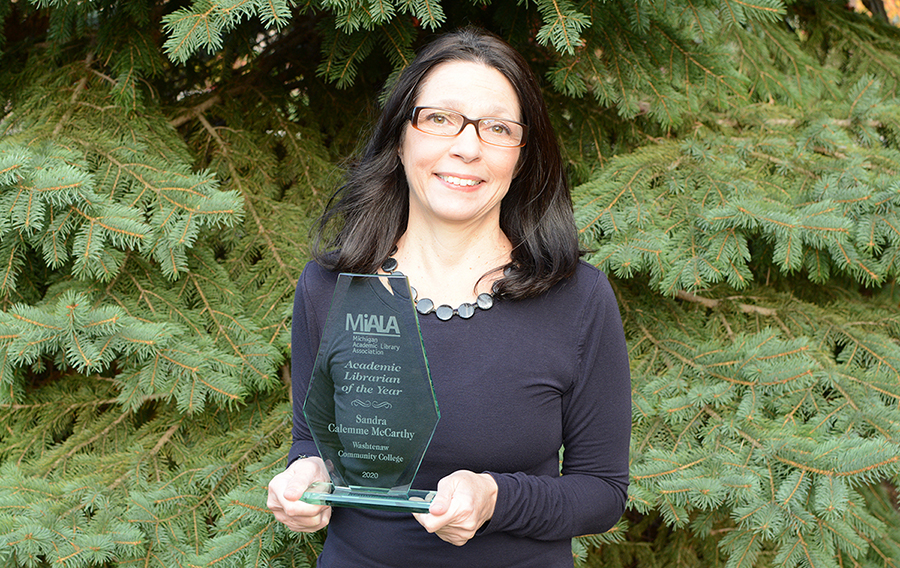 “I’m not the kind of person who becomes speechless, but when I received word that I was the recipient of this award I didn’t have words to express my surprise,” said McCarthy, who has been at WCC since 1999. “I’m really honored to be nominated and recognized by my peers.”

McCarthy received the award during the virtual presentation of the 2020 Michigan Library Awards on Thursday, October 29. The annual awards are considered the state’s highest honors within the library community.

McCarthy and 10 other award winners were chosen through peer review for their outstanding achievements within specific categories.

The Academic Librarian of the Year Award recognizes the outstanding accomplishments of a librarian or library administrator and their contributions to their institutions and academic libraries within the 2019-20 academic year.

McCarthy holds a Political Science bachelor’s degree and Library and Information Science Master of Science degree from Wayne State University and a Liberal Studies Master of Art degree from University of Detroit-Mercy.

She’s extremely active in national and state associations, including serving as past chair of the Association of College & Research Libraries Community and Junior College Libraries Section, where she established a task force to encourage scholarly research by community college librarians and a virtual planning committee to create engagement opportunities for library workers with limited travel support.

“I matured as a community college professional when elected to the ACRL Community and Junior College Libraries Section chair position last academic year and through all the other committee positions I currently hold and have held,” McCarthy said during her acceptance speech. “I have cultivated a network of friends and colleagues over the years by collaborating on these projects.”

She is also a volunteer administrator and co-founder of the Michigan Virtual Reference Collaborative, which enabled its 15 member libraries to seamlessly support students during the pandemic. The collaborative was established in 2003 and Washtenaw Community College is one of its founding members. The Bailey Library Ask a Librarian service is a direct result of McCarthy’s work.

At WCC, McCarthy has created valuable campus collaborations between faculty, staff and students within with the Nursing program and Allied Health Division, STEM education, and the Life Sciences and Physical Sciences programs.

During a sabbatical taken in the Winter 2020 semester, McCarthy completed a study of health sciences librarians’ perceptions. Her findings will be published in a forthcoming issue of the peer reviewed Journal of the Medical Library Association.

As a member of the WCC Sustainability Council, McCarthy helped WCC become the 88th school in the nation and one of three in Michigan designated as a Bee Campus USA. She also started the popular seed library on campus several years ago and has been interviewed by many news outlets and other academic librarians looking to replicate this project.