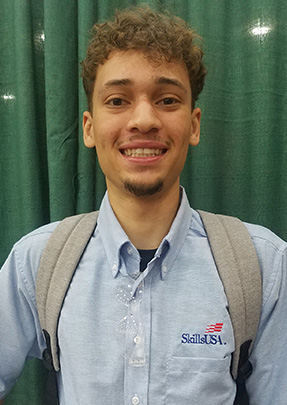 Now the Washtenaw Community College student hopes his effort on Thursday put a finishing touch on a top-3 finish in the automotive refinishing technology category.

Gray will find out if it was good enough to win a national title during Friday night's closing ceremonies and award presentations. It's the first time Gray has competed in the annual event. A first-place finish could open the door for him to compete in the SkillsUSA world competition.

"Today went very smooth. Estimating is the one area I think I could have used a little more practice at, but most of what I had to do here I do pretty much every day from 7 in the morning till 9 at night. So I was prepared," Gray said.

All of the categories were familiar to Gray, just the venue was new. He's spent the last 2 1/2 years preparing for this day, through on-the-job training and then his classwork at WCC. Most of his on-the-job training has taken place at Gerber Collision & Glass near Briarwood Mall in Ann Arbor. He started working right after graduating from Ypsilanti Community High School in 2017.

There he tutored as a prepper for body technician Ernie Collyer and painters Mike Ransom and Drew Spentall. When he enrolled at WCC, he gained additional knowledge from Jay Mosquera, a WCC lab technician and instructor who accompanied Gray to this week's national competition.

"Ernie and Jay have been huge mentors and so have Mike and Drew," Gray said. "I love painting. It's almost like a stress reliever. When I'm about to start a job it puts stress on, but once I get started it's relaxing."

Gray also is working toward building his resume so he one day can land a job in a "high-class shop, working on luxury and custom cars."

"Cody is a really mature kid who has his stuff together," Mosquera said. "His friend was taking a custom paint class of mine and asked if his buddy could come one day. Cody came, then signed up for class and ended up beating his buddy (at the SkillsUSA state competition)."

Gray is one of three WCC students competing at this week's SkillsUSA competition. Evan Pasternak competed in the overall welding category on Wednesday, and Tyler Stott gave it his best shot during Thursday's Collision Repair Technology competition.

College and high school students from around the country are competing in a wide variety of skills ranging from automotive, aviation and diesel technology and maintenance to skills such as advertising design, crime investigation, hair styling, culinary, robotics and many other categories.

SkillsUSA estimates that more than 16,000 people — including students, teachers and business partners — are attending this week's conference. The annual event returns to Louisville in 2020 before moving to Atlanta in 2021 to start a six-year run there.